Down economy provides opportunities for entrepreneurs 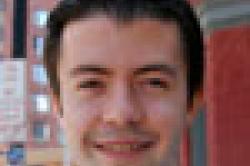 Scrimple.com is expanding its product line, services and geographic reach.

It's also hiring a summer staff.

All this in a struggling economy?

"It's actually a great time for us to be operating," he said in an interview.  "With people losing their jobs, they're looking for ways to save and we can help them."

Ackerson co-founded the business with Justin Anderson '08, a graduate of Cornell's School of Engineering, and Kerry Motelson '08.

Ackerson is Scrimple.com's chief executive officer, Anderson is its chief technology officer, and Motelson, an '09 MILR candidate, is an advisory board member.

Scrimple.com started as a class project in 2007 and was incorporated later that year.  In 2008, it won Cornell's Big Idea competition.  It remains a self-funded business, Ackerson said.

"S" stands for "student." More than 400 cards, which carry additional discounts for students, have been sold.  Sales of 100-plus cards were generated through Alpha Phi Omega, which sold them to raise funds for its community service efforts.

It combats fluctuating market conditions such as snow or rain by sending – at select times -- coupons to customers who have opted into the service via its website, Ackerson said.

The site is slated to go live in a month, he said.

Syracuse and Binghamton businesses are being added to the Scrimple.com directory within the next few weeks, Ackerson said.

Cornell's eLab, a business incubator for undergraduate entrepreneurs, has provided professional work space for Ackerson and his team.

He has learned to pace himself.  "One of the most difficult things is self discipline in everything you do."

Ackerson, who plans to stay in Ithaca after graduation to continue building the business, said life as the CEO of a start-up has taught him many lessons.

"It's all about building a team, and how essential that is to getting anything done" he said.

Being an entrepreneur, he said, "makes you act and think differently.  You realize how much opportunity there is out there and how much change you can bring to the world."