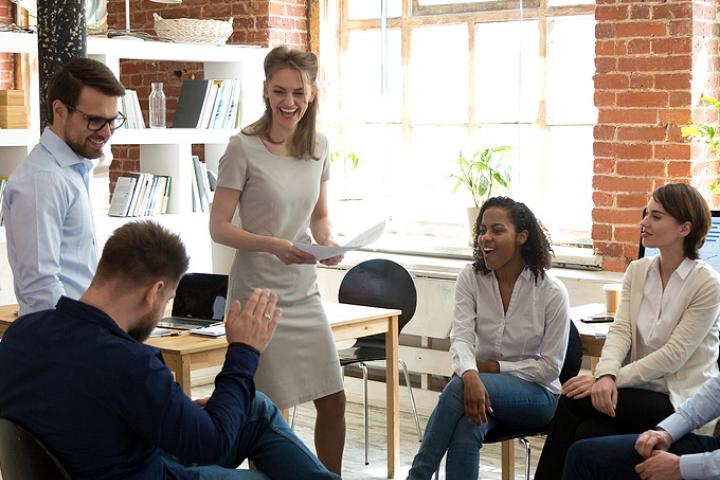 Companies that invested more in employee training before the pandemic were less likely to make layoffs and workforce reductions – such as offering early retirements and leaving vacant positions unfilled – to cope with pandemic-related financial pressures, according to new research by ILR Associate Professor Rebecca Kehoe.

In the paper, “Investing for Keeps: Firms’ Pre-Pandemic Investments in Human Capital Decreased Workforce Reductions Associated With COVID-19 Financial Pressures,” Kehoe and co-authors – Scott Bentley of the State University of New York at Binghamton, and Hyesook Chung, Ph.D. ’22, – suggest that investments in training increase the value of employees to an organization. As a result, the organization is less likely to see employees as disposable resources that can easily be let go when the organization faces pressures to reduce costs. Moreover, the authors argue that training investments may offer even stronger job protection when paired with an organization’s simultaneous investments in other resources (e.g., technologies) with which employees’ knowledge and skills may be specialized.

To test their hypothesis, the researchers took a sample of U.S. federal- and state-chartered retail banks obtained from the Federal Deposit Insurance Corporation (FDIC). After excluding banks with fewer than 100 employees, as well as custodial and agriculture credit banks, which do not engage in traditional retail banking, their final sample included 1,364 banks with quarterly observations from the first quarter of 2018 through the fourth quarter of 2020.

They then relied on banks’ quarterly reports, which contain information on banks’ operations, finances, and performance and collected data on layoffs from state Worker Adjustment and Retraining Notification filings.

To further illuminate the observed relationships, the authors ran additional empirical analyses by conducting interviews with 12 bank leaders, and reviewed annual reports for 35 banks in their sample.

Their findings supported their prediction that banks’ investments in training in the two years before the pandemic would decrease their reliance on layoffs and workforce reductions to cope with pandemic-induced financial pressures. Further, training investments offered even greater protection to employee jobs in banks that had also invested heavily in physical capital (including in technologies supporting automation, cloud computing, and mobile and digital banking platforms) in the same period. Their analyses also offered support for their expectation that banks with higher levels of training made more cuts to expenses in other areas, as an alternative to workforce reductions, when faced with higher pandemic-induced financial pressures.

“Importantly, these findings provide evidence that the same investments that firms make to support the development of employees’ human capital in normal times also offer a buffer to employees’ job security in the face of financial precarity. That is, those firms whose employees benefit from more extensive training and development opportunities as a rule are also less likely to make workforce reductions as a response to financial pressures in a crisis. Such firms, it appears, are investing in employees ‘for keeps,’” the authors wrote

The research was supported in part by a grant provided by ILR’s Center for Advanced Human Resource Studies and appeared in the December issue of the Journal of Applied Psychology.