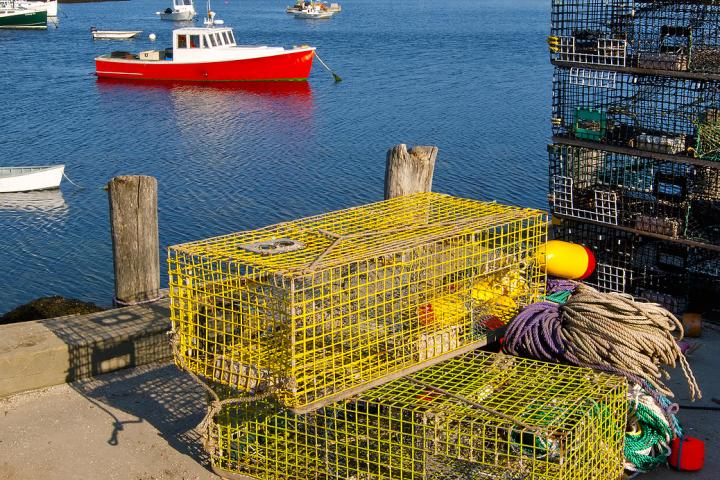 In her paper, “Lobsters, Whales and Traps: The Politics of Endangerment in the Gulf of Maine,” Associate Professor Sarah Besky, a cultural anthropologist, draws on public archives, popular media and ethnographic observations of public meetings about North Atlantic right whale regulations to show “how ecological fragility and white working class fragility become yoked together.”

Besky explains that lobster fishers on the coast of Maine are “grounded in … narratives not just about fishing, but about fishing in the ‘right’ way. Fishers’ adherence to these unspoken rules turns the coast – and the ocean – into inheritable property. It makes them into a highly guarded white sovereign space.”

Moving into that space is the North American right whale, an endangered species that swims close to the shoreline. Warming coastal waters have caused the whales to migrate north, bringing them into congested fishing areas like the Gulf of Maine. Lobster traps prove to be particularly dangerous for these whales, as nearly 400,000 vertical ropes create a hazard that can result in immediate death, or prolonged entanglements that can restrict a whale’s ability to swim, eat, breathe, mate or care for calves.

In April 2019, the National Oceanic and Atmospheric Agency worked with environmental groups, scientists, government officials and representatives from the Atlantic trap fishing industry to come up with a solution, and consensus agreement was reached to drastically reduce the amount of rope used in New England fisheries.

“After the meetings, however, Maine lobster groups began a campaign to counter the narrative that their rope might be culpable,” wrote Besky, and by August of that year, the Maine Lobstermen’s Association withdrew from the agreement. “Lobster fishers claimed that they – not NOAA scientists – knew best what effect their traps had on the coastal environment … Their deep well of intergenerational knowledge – they claimed – made them excellent conservationists, of not just lobsters but all marine life.”

According to environmentalists, marine scientists, and tech entrepreneurs, one potential solution to the ongoing problems faced by the fishermen is ropeless gear, which would allow fishers to geolocate their traps and, with the press of a button, cause a coiled rope attached to the submerged trap to shoot from sea floor to surface.

If it proves economically viable, ropeless gear might help protect the whales and signal a brighter future for lobster extraction, Besky says, but that occludes a larger problem.

Besky cautions that ropeless gear may not be the silver bullet solution that some have claimed it to be. She explains, “One of the consequences of a warming ocean is that ﬁshers anxious to maintain their livelihoods are moving away from ‘in-shore’ waters like the harbors of the Gulf of Maine to the ‘off-shore’ ﬁshery. Off-shore lobstering is much more capital-intensive and hierarchically organized than in-shore lobstering. The long-term promise of ropeless gear, then, is that it is a means of extending the territorial reach of extraction. As a conservation and accumulation measure, ropeless gear revives claims on the open ocean—terra nullius for the internet era.”

For their part, the Maine lobstermen reject the need for ropeless gear. Instead, dozens signed a petition claiming they had never seen a North American right whale in all their year of fishing, while others Besky explains, “engage in what [anthropologist Tim] Choy calls ‘anticipatory nostalgia,’ the invocation of ‘an expectation that something of the present will, in the near future, be lost.’

According to Besky, in the face of a climate crises that has no historical precedent, Maine lobster fishermen have been reluctant to discuss the issue. Lobster fishers tout their collectively held knowledge and the numerous voluntary measures they have taken to protect and preserve the health of the lobster stock. Some conservationist favor, on the other hand, top-down, technoscientific state regulations like ropeless gear. Besky suggests that framing the issue as a conflict between the working class and conservationists misses the point. She shows how both use climate crisis to make claims to coastal Maine as a white settler space.

“The blending of anxieties about nonhuman extinction with imaginaries of the end of a settler colonial economy,” Besky concludes, “has reinforced, rather than undermined, the naturalization of the white settler as the primary subject, and victim, of climate disaster.”