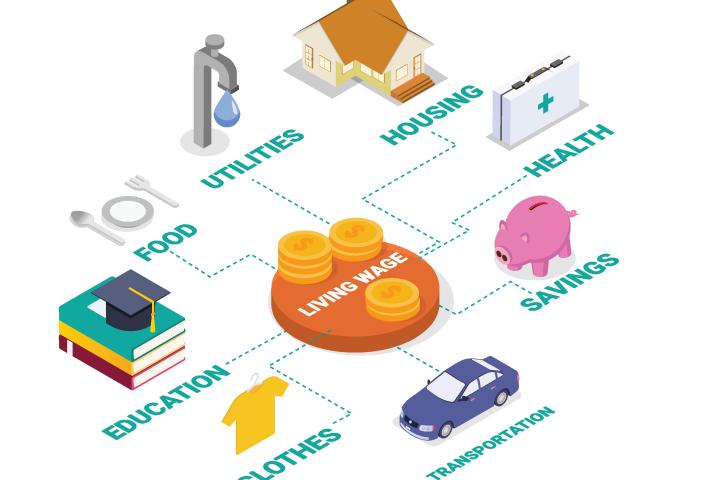 Living wage legislation would lead to pay increases for 30 to 40% of all workers in Tompkins County, and 65 to 75% of Black workers, according to a new policy brief led by ILR Ithaca Co-Lab Director Ian Greer.

“I was really struck by the racial disparity,” Greer said. “We've been talking about racial disparities throughout this pandemic, and when it comes to living wage, they're really striking.”

The term living wage refers to a theoretical income level that allows individuals or families to afford adequate shelter, food and other necessities. The researchers used a calculation of Living Wage from Alternatives Federal Credit Union. Currently, the living wage for Tompkins County is $16.61 per hour, while Upstate New York’s minimum wage is $13.20 per hour. According to estimates from research published in May 2021, there were 660 black workers in Tompkins County making less than a living wage and 343 making more. Among white workers, about 11,000 were making less, while 26,000 were making more.

The group found that only 2 to 3% of workers would lose benefits from government assistance programs – such as Supplemental Nutrition Assistance or Medicaid – affected by the raises. But, Greer points out, fewer workers would be affected if they reduced the number of hours they work, or if benefits thresholds were reformed to allow more earned income. The group also found that while employer opinions varied, most support the implementation of living wage legislation in principle.

In addition to Greer, researchers from ILR including Russell Weaver, Sally Klingel, Reed Eaglesham and Maru Rodriguez, as well as Shaianne Osterreich (Ithaca College) and Sean O’Brady (McMaster University), have been studying instituting living wage legislation for several years. Both Greer and Osterreich presented the group’s findings to the county legislature’s Workplace Diversity and Inclusion Committee in August.

The research team was guided by the Tompkins County Living Wage Working Group. Convened by Pete Meyers of the Tompkins County Worker Center and Anna Kelles, then a county legislator and now a New York State Assembly member, the group included other elected officials, employers and local activists. First, it gathered relevant labor market data for Tompkins County. Next, it conducted an analysis to understand how a living wage increase would affect benefits. Finally, Greer conducted an employer study, interviewing 40 employers to gauge how the pay increases would affect them.

The researchers’ policy brief identifies issues brought up by employers:

While the working group does not take a definitive position on the subject, its analysis gives a clear indication of who would benefit from a substantial minimum wage increase, Greer said.

“I think there's an overarching need for it myself,” he said. “I think the research we've done supports that. Facts are facts.”