The Impact of the White Gaze at Work 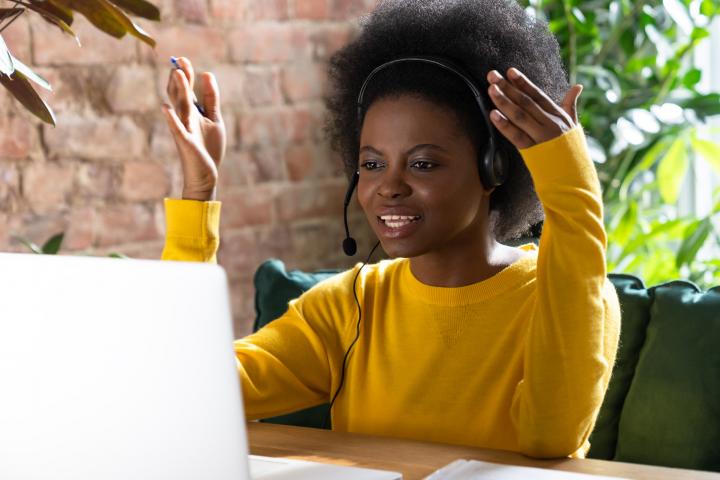 In the paper, “’Against a sharp white background’: How Black women experience the white gaze at work,” published in October by Gender, Work & Organization, McCluney and her co-authors Verónica Caridad Rabelo of San Francisco State University and Kathrina J. Robotham of the University of Michigan, aim to understand how whiteness is embedded within organizations.

“What our research found is that white gaze requires Black women to monitor how they look, emote, talk, and behave if they want to fit in and lead at work,” McCluney said. “Black women must expend considerable resources – time, money and energy – to accommodate whiteness.”

For the study, the authors accessed approximately 284,000 #BlackWomenAtWork tweets through Document the Now’s digital archive of public social media content. They then focused on tweets sent in the first 12 hours, eliminating retweets, those that didn’t meaningfully engage with the hashtag and any that were either written by bots or on behalf of companies.

All three authors then read the 1,169 qualifying tweets to identify their literal meanings, interpret their figurative meanings and organize them into larger categories of embodied experiences.

According to the authors “Our critical discourse analysis identified four mechanisms through which whiteness manifests in organizations via the white gaze. We find that whiteness is (1) imposed, (2) presumed, (3) venerated, and (4) forced through the use of the white gaze. Further, we find that each of these mechanisms is associated with a unique set of practices, or everyday behaviors through which White and non-Black people of color mirror, uphold, and reinforce power relations, including racism and sexism.”

The paper indicates that whiteness is imposed at work, primarily through the adoption of Eurocentric standards as the basis for organization-wide norms and expectations. There are two keys to this imposition – white display rules and white beauty standards.

Whiteness is also imposed through white beauty standards, norms that reflect and give privilege to Eurocentric aesthetics, including body shapes, skin tone and hair texture.

The second mechanism through which the white gaze manifests in organizations is how whiteness is presumed. Presumed whiteness is associated with two key practices – whiteness as default and depersonalization.

Whiteness is often the presumed default at the professional level, which means Black women’s roles are not always recognized. These experiences illustrate how the white gaze relegates Black women to particular occupations and roles when whiteness serves as the conceptual default.

Whiteness is also presumed via the depersonalization of Black women and the refusal and failure to recognize their individuality. This occurs when Black women are mistaken for Black coworkers.

The third mechanism, whiteness as venerated, includes practices that cast whiteness as both essentialized and superior. The white gaze views certain characteristics as inherent to different racial groups, as such white people and standards are venerated, while Black women are respected so long as they assimilate in accordance with the white gaze.

The fourth mechanism through which the white gaze manifests refers to how whiteness is forced upon non-white bodies at work. Specifically, white and non-Black people engage in
practices that reflect entitlement to, exploitation of, and endangerment of Black women at work.

Entitlement reveals itself through encroaching on Black women’s time, personal space, and bodies, often resulting in boundary violations. Physically, this can manifest through instances of non-consensual touching black women’s hair, while mentally it can include entitlement to their time and participation in unwanted conversations about race.

Whiteness is also enforced through the exploitation of Black women and their work. Exploitation manifests as invisibility, or situations where their presence and/or ideas are ignored and overlooked. Other exploitative practices upheld the Strong Black Woman stereotype, whereby people viewed Black women as strong and invincible, and as having a limitless capacity to
support or save others.

Finally, whiteness was also enforced through endangerment – instances of intimidation and abuse that put Black women at risk for harm. The researchers found instances when white gaze endangered Black women by disregarding their safety and dignity for others’ entertainment.

“The white gaze is a constant presence in the work lives of Black women,” McCluney said. “The end result is the regulation of Black women’s bodies at work takes its toll. So, it is crucial that we continue to recognize Black women’s experiences and make visible the ways that power – especially whiteness – is often invisible yet omnipresent.

“Organizational leaders and employees can benefit from our work by learning how to more effectively notice white gazing, intervene when it is happening, and hold employees accountable when they are enacting it.”