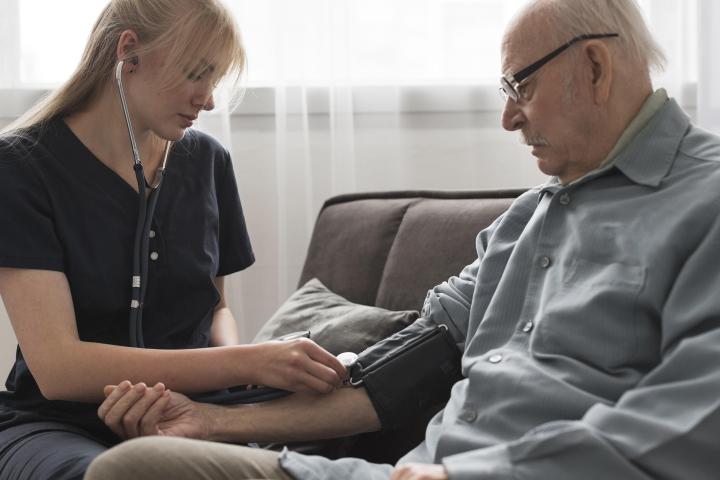 Paid home care workers are helping patients manage chronic conditions, and promote general and mental health – going well beyond the personal care contributions for which they have been historically associated, according to an “Innovation in Aging” article published Jan. 6 by researchers from Weill Cornell Medicine and the ILR School.

The study also revealed that expanded duties, particularly emotional care, resulted in a higher perceived value of the workers’ contributions, which could help boost pay for home care workers, most of whom receive low wages; one in four lives in households below the poverty line.

To conduct the study, the researchers surveyed 800 New York state residents by telephone through the Cornell Survey Research Institute’s 2020 Empire State Poll. A third of respondents reported that they or an immediate family member received care from a paid home care worker, and of those 274 people, 74% said the workers provided more than personal care. That and other responses formed a picture that the team says can help realign reimbursement for paid home care workers’ wages and services, and improve standardized training – particularly for emotional and some medical care aspects.

“Our findings also have implications for federal policymaking, for example the Biden administration’s recent American Jobs Plan, which includes an estimated four hundred billion dollars of investments in home care workers over an eight-year period. This proposal seeks to expand home care in the U.S. while increasing the quality jobs for paid home care workers. Our findings provide a framework for investments in the expanded role that these caregivers play in a manner that would enhance quality of care and working conditions for this essential workforce … ,” they wrote.

Sterling said, “Home care workers make valuable contributions to care that go way beyond assisting their clients with activities of daily living. Not only did we find that they assist with medical care and provide emotional support, but doing so was associated with higher levels of client satisfaction.”

“We’ve seen home care workers provide essential frontline care during the pandemic, but the reality is, they have been providing this type of care all along, but often not recognized for it,” she said.

Avgar said, “Our findings provide support for efforts to promote public policies and organizational practices that elevate the role that home care workers play and improve their working conditions, including wages and benefits. This research adds to the body of evidence on the critical contribution of workers that are, far too often, invisible to the health care system and to policymakers.”

“Improving working conditions and expanding training for home care workers has the potential to address both long-standing quality of care issues in our health care system, especially for aging populations, while, at the same time, advancing economic opportunities for a workforce that is disproportionately comprised of women of color—a powerful win-win,” he said.

The research – supported by Douglas Wigdor, the Cornell Center for Health Equity and the National Heart, Lung, and Blood Institute – is part of a growing body of work led by Sterling and Avgar that explores the working conditions and future of the rapidly growing home care workforce, expected to increase from 2.3 million statewide to nearly four million by 2030.

Recent stories about research by Avgar and Sterling on paid home care workers include: