Codeswitching and Perceived Professionalism at Work 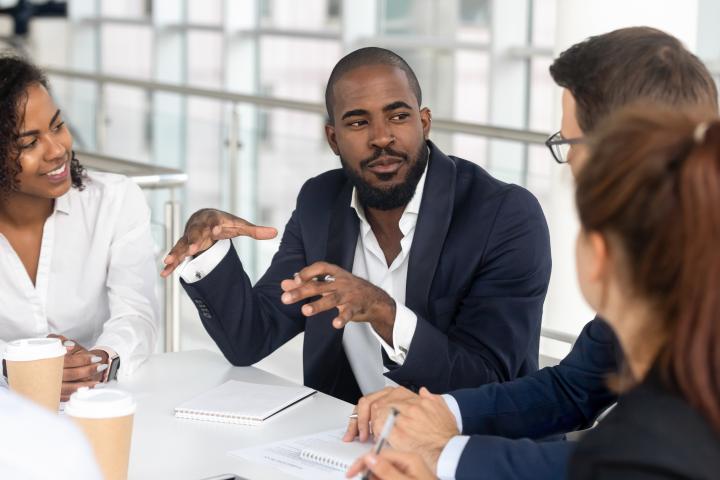 Codeswitching – adjusting behaviors to optimize the comfort of others in exchange for a desired outcome — has long been a strategy of Black people for excelling in white cultural spaces.

New research by Cornell ILR Assistant Professor Courtney McCluney confirms that Black employees who engage in racial codeswitching are consistently perceived as more professional, compared to employees who do not codeswitch, by both Black and white individuals.

“Our findings suggest that organizations would really benefit from examining how they may inadvertently reward codeswitching behaviors,” McCluney said. “Companies often claim that they want employees to ‘bring their whole selves to work,’ without realizing that they are unintentionally penalizing Black employees who do not fit into the culture. To help combat this, I would recommend that companies expand or redefine what constitutes professionalism so that it encompasses a range of cultural norms, behaviors and values. They can do this by increasing representation of non-White employees in leadership levels, questioning the unspoken cultural norms that exist in their organization, and reducing monitoring behaviors that scrutinize the appearance and behaviors of marginalized employees.”

For the study, McCluney and her co-authors hypothesized:

To test their assumptions, the researchers shaped two studies – separated by gender – in which they created a fictitious Black lawyer who does, or does not, engage in racial codeswitching in the workplace.

In the first study, participants were instructed to imagine themselves as a recently hired lawyer at a firm in a large metropolitan city. They were told that the study was designed to capture their first impressions of a hypothetical coworker. Next, participants were instructed to listen to a voicemail from the coworker, a third-year associate named Lamar Matthew Jackson (Study 1a) or La’Keisha Renee Jackson (Study 1b). In the voicemail, Lamar/La’Keisha shared advice on the “unspoken ways to succeed at the firm.”

For the codeswitching manipulation, the researchers varied the sound of the fictitious coworkers' voice, as well as a verbal description of their preferred name choice, hairstyle and style of speech in order to demonstrate an overall profile of a coworker who either engaged in codeswitching or did not codeswitch within the workplace.

Following the study, the researchers considered the idea that the participants may have focused too heavily on the sound of the coworker's voice and consequently paid less attention to the other codeswitching behaviors described in the voicemail. As a result, they sought to reduce the potential influence in Study 2 by transcribing the content of the voicemail recordings from Study 1 into a written email.

Like Study 1, the co-authors manipulated whether a Black man (Study 2a) or a Black woman coworker (Study 2b) did or did not engage in racial codeswitching across three behaviors -- name selection, style of speech, hairstyle.

The researchers also found partial support for Hypothesis 2, as Black and white men did not differ in their evaluations of hair, while Black women expressed more agreement with the natural hairstyle choice than white women.

The authors conclude, “Our study demonstrates one of many dilemmas that Black employees face in their everyday work experiences: whether codeswitching or not will elicit perceptions of professionalism. Although all employees may behave more professionally at work compared to more casual settings, individuals from stigmatized racial groups may feel a disproportionate pressure to conceal significant cultural aspects of themselves to minimize stereotyping ascribed to their social identities.

“Our findings suggest that racial codeswitching is a necessary behavior for Black employees to be perceived as professionals. Engaging racial codeswitching might limit how Black people are ‘allowed’ to behave at work if they desire to maintain these perceptions. Further, it places a burden on Black employees to chronically monitor their appearance, speech and behaviors while at work, possibly contributing to burnout and fatigue.”