Professor hopes her research will impact the development of ethical standards for the design and use of hiring platforms. 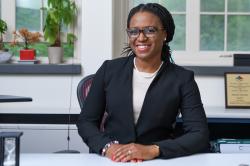 CAREER is the name by which the foundation’s Faculty Early Career Development Program is known. The award supports early-career faculty who have demonstrated exceptional ability to conduct impactful research that will benefit society.

Award winners, according to the foundation, have the potential to serve as academic role models in research and education and to lead advances in the mission of their department or organization.

Ajunwa, who is also a Cornell Law School associate faculty member and a faculty associate of the Berkman Klein Center at Harvard University, plans to use the grant to conduct research on how hiring platforms are designed and developed.

She also plans to delve into legal and ethical issues surrounding the design of hiring platforms and the data required to run them, as well as the data they generate. The research will be conducted over a five-year period.

Ajunwa said that by working with hiring platform developers, she hopes her research spur the development of ethical standards for the design and use of hiring platforms.

To accomplish this, Ajunwa will work with two platform development companies in New York City and Boston. She will also interview workers and human resources managers to learn about their hiring platform experiences.

Ajunwa’s research on the legal and ethical issues of workplace technology issues includes "The Paradox of Automation as Anti-Bias Intervention," published by the Cardozo Law Review. Another article, Limitless Worker Surveillance, analyzing legal issues associated with the socio-legal phenomena of workplace surveillance technologies, has been downloaded more than 3,000 times and was endorsed by the editorial board of “The New York Times.” See a full list of her scholarship here.