In a Land of Lakes 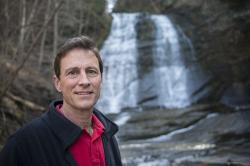 The western cascade of the Lick Brook gorge inspired an ILR graduate to prepare for a job that didn’t exist.

Thirty years ago, he saw what generosity, forethought and social entrepreneurship could do for the glorious glen half a mile south of Buttermilk Falls. Instead of falling prey to housing sprawl, the waterfall corridor remains natural and is open to the public, thanks to an easement, land donations and the purchase of 100-plus acres that will forever preserve the stunning gorge.

Without that protection, he said, “I knew it would go away.”

Along with a staff of 12 and hundreds of volunteers, Zepp stewards 18,000-plus acres of conserved land, including 32 public preserves spread across 12 upstate New York counties.

“It all ties back to ILR,” Zepp said. “Saving the flora, the fauna, the water — it’s all about negotiating.”

“ILR provided me with skills that I use every day. I’m glad that I’ve had the opportunity to put them to work for our environment.”

Growing up in Westchester County, north of New York City, he had seen sloppy development compromise public access to beautiful natural areas. As an undergraduate, Zepp was drawn to professors and courses in ILR’s Department of Organizational Behavior.

He also took courses at the College of Agriculture and Life Sciences, which helped him understand the biological value of land preservation, in its infancy as a professional field.

After graduating from CALS with a master’s degree in natural resources, he put his skills to work by helping channel growth and preserve habitats in Connecticut, western New York state and Washington, D.C.

He returned to Ithaca in 2003 to lead the Finger Lakes Land Trust, a non-profit he helped found in 1989.

Zepp has worked with landowners to secure thousands of acres for future generations.