Four years after welcoming them to ILR, Associate Professor Adam Seth Litwin followed up, sending 13 students letters they wrote to their future selves. 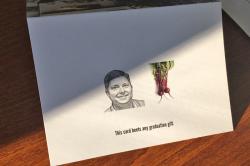 Associate Professor Adam Seth Litwin taught his first Freshman Colloquium seminar in 2016, making his Class of 2020 cohort special in more ways than one.

Trying to find a fresh perspective on a new teaching endeavor, Litwin assigned the “Letter to Yourself.” The prompt encouraged students to capture the thrill of their first few weeks at Cornell and to advise the versions of themselves they hoped to be upon graduating.

“At that same point in my own life, I felt so lucky and privileged to be attending college and being committed to squeezing every last bit of juice out of my undergraduate experience. But, thinking back, I really wish I had put those thoughts in writing to myself—a note written in the most familiar voice, reminding me how I once looked at the world and challenging me to either recalibrate or to consider how my life and worldview had evolved,” Litwin wrote in the letter-to-self assignment when he distributed it in 2016.

Required of new ILR students, the semester-long seminar introduces them to industrial and labor relations as a discipline, ILR faculty and fellow ILRies. Each small cohort is led by a professor who also becomes their de facto faculty adviser.

Litwin promised to personally return copies of the students’ letters, in their originally sealed envelopes, in May of 2020. This year’s graduation ceremonies are postponed due to the pandemic, so rather than hand the letters to students this weekend, Litwin mailed them May 17. From a U. S. Postal Service blue box in Lansing, the letters traveled to students across the country.

“I got some of those 9” x 6” ILR envelopes. In each, I stuffed a custom graduation card that I had printed containing a graduation-related quip and a hand-written note to each student referencing something I recalled from their letter.” Litwin had students submit two copies of their letters for the assignment, one to be graded and one to be sealed and returned later.

“On the front of the card was a picture of the whole group from the night my family hosted them for dinner in our backyard almost four years ago. After I stuffed the graduation card in the envelope, I scrunched in their letter from freshman year.”

“It turned out, each letter required a special stamp for non-machinable letters. So, I bought my stamps and brought them home. I sealed them up with tape and hand addressed each based on where students told me they would be — Ithaca, Queens, North Carolina, New Jersey and Washington state, among other places.”

Margaret Dongyeon Lee ’20, who now lives in New York City, is from South Korea and arrived at ILR after graduating from high school in Dubai. “Flying halfway around the world alone with two suitcases and a backpack, I was both excited and a little intimidated by what lay ahead. The letter to self I had submitted for our freshman colloquium reminded me of all of those sentiments.” 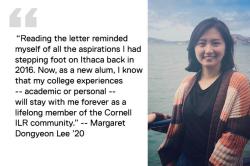 “Freshman me wrote about how much I already love ILR and its supportive environment, as well as its balanced coursework that blends history, business, and economics. Reading the letter reminded myself of all the aspirations I had stepping foot on Ithaca back in 2016. Now, as a new alum, I know that my college experiences -- academic or personal -- will stay with me forever as a lifelong member of the Cornell ILR community.”

Louisa Heywood ’20 opened her letter at her home in Seattle. It “created a moment of levity and joy in the middle of exams and the end of classes,” she said. “It was thoughtful of Professor Litwin to create the exercise in 2016 and to carry it out over long distances in 2020, and I remain grateful to have a friend and mentor like him.”

“In addition to the letter assignment, Professor Litwin implored us to maintain a diary during our time at Cornell. I kept only an anemic book of jotted notes throughout the years, but I think his advice is great,” Heywood added. 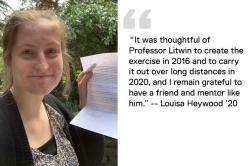 Josh Yarnis ’20 received his letter at his home in Morristown, New Jersey.

“Four years ago, I never could have imagined the current way of life and having the final semester of my senior year be so unorthodox. It was definitely a little bittersweet reading the letter,” he said.

“It has been an amazing four years full of highs and lows and everything in between and although it is not ending the way anyone could have imagined, I'm just happy to have been able to have the experiences that I've been fortunate enough to have.”

Litwin, in an interview this week, said, “When I conceived of the assignment, I could not have imagined that we would be living amidst a once-a-century pandemic by the time these letters ‘ripened.’”

“In this context, when the entire world has been shaken to its core, it’s especially important that we remember who or what most matters to us in life. Students wrote about people who have influenced them, intellectual or even professional pursuits — all aspects of life that drove them before they were firmly ensconced in the ‘Big Red Bubble,’ let alone ordered to shelter-in-place by COVID-19. So, reading the letters in this current context should reground them and reorient just at a time when we could all use it.” 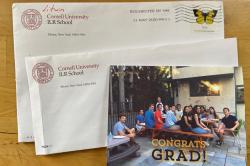