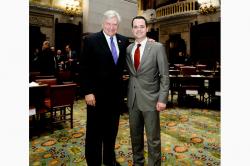 As one of five Independent Democratic Conference members in the state senate, Carlucci aligns with Republicans, as well as with Democrats, depending on the issue.

“The idea was to change the status quo,” he said, referring to the coalition, which bucks the political tradition of voting down party lines.

Busting loose from “hyper-partisanship” has contributed to change such as raising the state’s minimum wage and legalizing same-sex marriage, said Carlucci, whose district includes parts of Rockland and Westchester counties.

His professional political career began at age 24 when he beat a 28-year incumbent to become town clerk of Clarkstown, N.Y. In his third term as a state senator, Carlucci is chair of the senate’s social services committee and sponsored the “ABLE” Act.

In April, the senate passed Carlucci’s bill to make Lauren’s Law permanent. Named after a girl who received a heart transplant, the law is credited with a jump in the number of New Yorkers willing to donate organs.