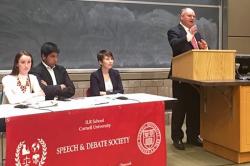 ILR hosted a debate March 8 on “The Vanishing American Corporation: Navigating the Hazards of a New Economy” by Gerald F. Davis, Wilbur K. Pierpont Collegiate Professor of Management in the Ross School of Business at the University of Michigan.

Starting off the night was Kara Lombardi, assistant dean for student experience and wellbeing.

“The idea behind the book project is to identify a book that students, faculty, staff and alumni can read together, so we can have a common experience,” Lombardi said. “The idea is that we create a community around this book and that we can come together and have dialogue and discussion related to the world of work.”

Before the debate, Hallock expressed his gratitude for Cornell’s debate program being housed within ILR.

“ILR is proud to have it centered here at the school, and it is one of the largest programs of its kind,” Hallock said. “With over 100 students in the program, it is also one of the most successful programs in the world, regularly winning competitive tournaments throughout the United States.”

Cornell Director of Forensics Sam Nelson introduced the topic being debated as “this house regrets the demise of the American corporation.”

“The topic is related to the ILR read, “The Vanishing American Corporation,” but it is not exactly about the book,” Nelson said. “We wanted to spice it up. It is about the underlining question -- is the demise of the American corporation a good thing or a bad thing?”

Chakrin said that as corporations declined, problems resulted for workers and communities.

“It is not the demise of the corporation itself, it is the latest change between the battle between labor and capital, along and the role of the American corporation, that has fundamentally changed and capital has won,” Chakrin said. “We believe it is problematic for communities, individuals and workers institutions that used to represent these individual workers.”

Muttalib made criticisms on how corporations have “undermined” the country’s democracy and unions.

“Our democracy has been hijacked by these corporations. Eighty-five percent of people agree that campaign finance reform is needed,” Muttalib said.

“Why has it not happened? Because corporations have put billions of dollars down to ensure that your voice is not heard,” he said.

In a response to Muttalib, Garcia argued that corporations did not damage unions.

“It was the shift to a service economy that resulted in, for example, Ford, that was responsible for all stages of production from gathering materials, putting the car together and selling it,” Garcia said.

“Now, you have companies that will get materials from somewhere else, produce in other places, like Apple with Foxconn, and sell in America and other western states,” she said.

Cimerman argued for greater redistribution policies, bigger taxes, and better labor and union protections. She concluded with an attack on the other side for “romanticizing” corporations.

“Their romanticized view of great American corporations not only does not exist anymore,” Cimerman said. “It never did.”