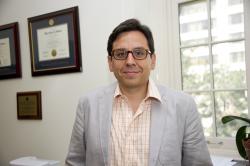 If you think Americans are pushed to speak the language of close-minded social idealists at the expense of free speech, new research led by a Cornell ILR School professor might make you cringe.

Political correctness loathed by some as censorship awash in leftist philosophy, actually boosts the creativity of mixed-sex work teams, according to findings being published in Administrative Science Quarterly.

"Our work challenges the widespread assumption that true creativity requires a kind of anarchy in which people are permitted to speak their minds, whatever the consequence," ILR Professor Jack Goncalo said in an interview.

For the increasingly diverse workplace, the research justifies PC beyond moral grounds as a practical foundation for creativity and potential profitmaking, he said.

The research is detailed in the article, "Stifling or Liberating? How Being Political Correct Influences Creativity in Mixed-Sex Work Groups" with Jennifer Chatman, University of California, Berkeley; Michelle Duguid, Washington University, and Jessica Kennedy, Vanderbilt University.

In two experiments with a total of 582 participants, groups of three were randomly instructed to be "politically correct" or "polite." Some groups didn't receive any instructions.

All were then asked to spend 10 minutes brainstorming business ideas. Creativity was measured by counting the number of ideas generated and by coding them for novelty.

Contrary to the widely held notion that being PC has a generally stifling effect, the results showed that a PC norm actually boosted the creative output of mixed-sex groups.

These results highlight a paradoxical consequence of the PC norm: A term that has been used to undermine expectations to censor offensive language as a threat to free speech actually provides a normative foundation upon which demographically heterogeneous work groups can freely exchange creative ideas, Goncalo said.

"PC facilitates idea expression by reducing the uncertainty that people tend to experience while interacting with the opposite sex," he said.

"The PC norm, by establishing a clear guideline for how to behave appropriately in mixed-sex groups, made both men and women more comfortable sharing their creative ideas."

What the research findings mean for the state gender relations, though, is troubling, Goncalo said.

"The fact that men and women still experience a high level of uncertainty while working together and that a norm as restrictive as PC provided a safer environment for free expression means we still have a lot of work to do."