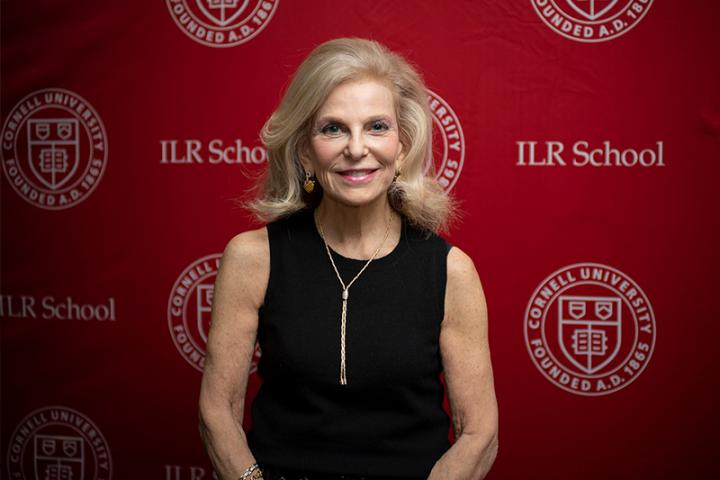 As a high school student, Joan Parker ’70, M.S. ’73, Ph.D. ’74 had no inkling of her future as a nationally recognized arbitrator and mediator, or of the influence of trailblazing women on a career trajectory that would take her to the top of her field. Then, a wonderful social studies teacher inspired her to go into industrial and labor relations, said Parker, honored in April by the ILR School with its Judge William B. Groat Award for professional achievement and commitment to the school and Cornell.

Rather than talk about her many accomplishments, including a teaching career at Rutgers University, Parker, in her acceptance speech at the Groat and Alpern Celebration in New York City, highlighted the people who guided her on her professional path.

“Manny Kafka told me we were on the threshold of an explosion in the world of work, that public employees would soon get the right to organize and bargain collectively and that legislation was pending in several jurisdictions that would bring a new dimension to labor relations.”

“He also predicted women were going to demand better jobs and want to be in leadership roles in both private industry and public employment.”

“I didn’t know what he was talking about. I thought I was headed to Radcliffe to major in English. But, Mr. Kafka inspired me to do some reading about labor relations, labor history and the National Labor Relations Act. And, most importantly, to look into Cornell University and its School of lndustrial and Labor Relations. I did and the rest, as they say, is history.”

Dean Kevin Hallock, in presenting the Groat Award to Parker, said, “Joan loved the ILR school so much and the feeling was mutual that we created a custom master's and Ph.D. program for her. She completed a six-year program in four years. It’s the rare triple play of degrees from ILR.”

Guidance came from ILR women who inspired her to enter into a field traditionally off limits to women.

The pathbreaking efforts of these women in the industrial and labor relations world would help her become a leading neutral in both the private and public sectors, a permanent arbitrator for several national collective bargaining agreements and an arbitrator, mediator and factfinder in the non-union sector.

“Jean McKelvey was my heroine. She, more than anyone else, persuaded me to take a doctorate instead of going to law school,” Parker said.

ILR faculty member McKelvey “was brilliant, inspiring and pioneering,” Parker said. McKelvey became the first woman, in 1947, to be admitted to the National Academy of Arbitrators. In 1970, she became its first woman president.

She advised U.S. presidents and governors and her prophetic 1971 article “Sex and the Single Arbitrator” broke down barriers that prevented arbitrators from deciding public policy on issues such as race and gender. “It was a huge turnaround toward arbitration of statutory issues. Jean got it right in 1971.” Parker said she was also influenced by Professor Alice Cook, Cornell’s first ombudsman and the person who opened the all-male faculty club to women; Alice Grant, the ILR Extension faculty member who traveled around New York state teaching programs for working women; and Lois Gray, the Jean McKelvey/Alice Grant Professor of Labor Management Relations Emeritus. Gray, who has been affiliated with ILR for 72 years, attended the event at which Parker was honored.

“They did not take ‘no’ for an answer and never assumed there was anything they could not do because of their gender. They made me believe that it was perfectly normal for a 28-year-old woman with a newly minted Ph.D. to start a career as a labor arbitrator and mediator.”

“While hard work and perseverance were absolutely essential, young women just like me would never have been able to realize their dreams and fulfill their potential had it not been for pioneering, tireless and ambitious women who came first, when the feminist movement was barely in its infancy.”

“The ILR School was a place where women, despite our small numbers, were never discouraged,” she said, noting that male professors were also supportive.

Her practice as a mediator and an arbitrator developed quickly in the male-dominated labor-management community, in part due to the ILR reputation. “They sure knew Cornell ILR and they had confidence in my pedigree.”

As she began her career, Parker was inspired by other extraordinary neutrals, people such as Eva Robbins and Ida Klaus.

“Eva was the epitome of the tough cookie.” The first female arbitrator in professional sports and an outstanding mediator, Robbins invited Parker to her Central Park West home. Parker went in thinking she might be offered an apprenticeship, but instead, received a stern lecture: “Be tough. Don’t expect anybody to build your career but you yourself. Work hard, put your name in print and never say anything you would not want to see reported on the front page of The New York Times.”

Parker said she left “feeling a bit deflated, but totally dedicated to working hard to building my reputation and my skill as a neutral.”

Ida Klaus is another standout person who helped pave the way for Parker’s career. Known as a woman “who thinks with a man’s brain,” Klaus was rejected by Columbia University Law School because of her gender. In 1928, she became one of six women accepted into the school's first coed class.

Klaus went to work on the New Deal and for the National Labor Relations Board, and to take a leading role in shaping New York City labor relations policy.

As Parker’s career developed, she helped neutrals breaking into the field. She was a professor and director of the Graduate Program in Industrial Relations and Human Resources at Rutgers University. She taught courses in labor law, arbitration, mediation and alternative dispute resolution, and has written books and articles on labor and employment relations topics.

Her firm, Joan Parker ADR, specializes in workplace investigations, fact-finding and settlement counseling. She has served on the Cornell University Council, and is active with the ILR Dean’s Advisory Council and Scheinman Institute Board of Advisors.

“My entire career has been the result of a superior education,” said Parker, praised by Hallock as a mentor to aspiring neutrals and as a resource to anyone in the Cornell community who needs her help.

“At Cornell, I knew I was preparing to do something meaningful with my life,” Parker said. “I worked hard and the perseverance paid off.”