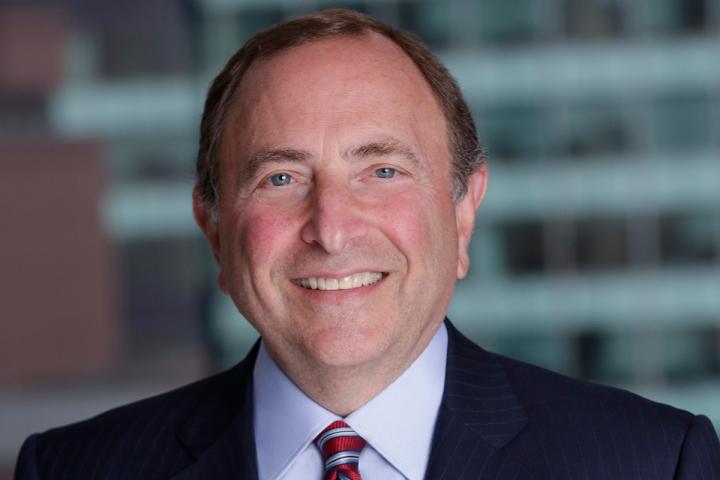 The scholarship will provide undergraduate financial assistance to ILR students with financial need. Preference will be given to students interested in pursuing a career in the sports industry or are members of the ILR Sports Business Society.

The sports management fund will support development of a sports/entertainment management course, provide stipends and cover expenses for industry scholars leading it, and fund guest lectures and related costs in support of the ILR Sports Business Society.

NHL owners chose to establish these platforms in recognition of his long service to the National Hockey League and the game of hockey. Bettman was elected the NHL’s first commissioner on Dec. 11, 1992. Thirty years later, and under his leadership, the league has grown its revenues from roughly $450 million to almost $5.4 billion today. The league has expanded its North American footprint from 24 to 32 teams, and its games are now broadcast in more than 140 countries.

“Our school prepares students to be at the forefront of an increasingly complex world of management and labor relations. The NHL’s generosity in honor of Gary Bettman benefits ILR students, preparing them to follow the commissioner's legacy of leadership and accomplishment,” said Alexander Colvin, Ph.D., ’99, ILR’s Kenneth F. Kahn ’69 Dean and Martin F. Scheinman ’75, M.S. ’76, Professor of Conflict Resolution.

“As Gary Bettman grew professional hockey into the international sporting powerhouse that it is today, he remained close to the ILR School, meeting with students, faculty and staff. We are incredibly grateful,” Colvin said.

In a statement, Bettman said, “I am grateful for my time at Cornell ILR and all that I learned there. I am certain that I would not be in the position I am today without my Cornell experience. I am also grateful to the NHL Board of Governors for bestowing this honor on me and on Cornell ILR.”

“Gary Bettman has done so much, not only for the league and our clubs, but for the sport of hockey, that our owners felt it only appropriate to recognize and reward his historic leadership by supporting an institution that is near and dear to his heart,” said NHL Deputy Commissioner Bill Daly.

“Gary is committed to the ILR School, what it stands for and what it was able to help him accomplish in his chosen field. He went from Long Island to Cornell and met his wife during his sophomore year. His three children graduated from Cornell and each has achieved significant success in their own careers and personal lives. It’s a Cornell success story,” Daly said. Michelle “Shelli” Bettman graduated from the Arts & Sciences College in 1975. The Bettmans’ children – Lauren Gershengorn ’01, Jordan Bettman ’06 and Brittany Baker ’10 – graduated from ILR, along with Lauren’s husband, Brian Gershengorn ’00, and Brittany’s husband, Weston Baker, AAP ’11.

“He has shouldered all of the stresses and pressures associated with running a professional sports organization, and has moved the sport forward with remarkable success, which is a testatment to his passion, commitment and fortitude,” Daly said.

“Gary has always believed in the quality of the sport and the entertainment it creates, and he’s been able to translate his own enthusiasm for the game in ways that have grown the league’s fan base to levels that no one could have fairly anticipated,” Daly said. “His tenure as commissioner has already left an indelible and enormously positive mark on the game, and he is committed to continuing and building on that legacy for years to come.”