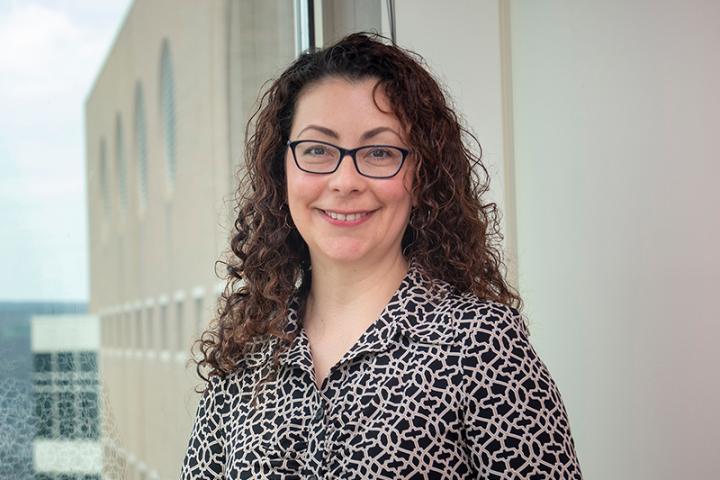 Since September, Assistant Professor Verónica Martínez-Matsuda has had what every writer dreams of – time to think and write.

Selected by the Woodrow Wilson National Fellowship Foundation as a Career Enhancement Fellow, she has focused for two semesters on her book, “An Experiment in Democracy: Race, Rights, and Reform in the U.S. Migrant Labor Camp Program.”

Monday through Fridays, Martínez-Matsuda gets to work in a seventh-floor Rhodes Hall office offered to her by the Cornell Institute for the Social Sciences.

Martínez-Matsuda is telling a story few know: from 1935 to 1946, the Farm Security Administration’s Migratory Labor Camp Program built and managed labor camps that gave Mexican, Asian and African-American farmworker families access to civil and labor rights, and a healthy living environment, for the first time.

Safe and sanitary housing, on-site medical services backed by the first national medical insurance plan, nursery and primary schools, recreational programs and lessons in democracy through self-government councils were offered at more than 100 permanent and temporary camps in California, Arizona, Oregon, Idaho, Texas and Florida, among other states.

“For those who lived there, it was life changing,” she said. “As dynamic community spaces, the camps were more than just labor centers aimed at improving agribusiness efficiency.”

After the camp program ended, the federal government’s commitment to migrants “gave way to conditions of precarity and risk that have only intensified in recent decades,” said the professor, who hopes the book helps show that good working and living conditions for migrant farmworkers are necessary and possible.

“The government intervened to bring about positive reform before and it can do it again,” said Martínez-Matsuda, hopeful that the book will impact the way federal decision-makers think about migrant farmworkers.

Martínez-Matsuda interviewed over 20 people who lived in the camps, which she has studied for more than 10 years. Her book will be published in 2019 by the University of Pennsylvania Press as part of its “Politics and Culture in Modern America” book series.

The camps united progressive federal officials and migrants “in an effort to combat the discrimination migrants encountered and the exploitive forces of corporate agribusiness at the height of its expansion, but the camp program also reinforced racial, gendered and class-biased division in agribusiness and society.”

While the camps introduced a more dignified way of living and working for migrants, they were often treated as ignorant by camp program administrators, who could be paternalistic and discriminatory.

The miniature utopian societies “ironically contributed to biased discourses and practices that justified migrants’ inequity and disenfranchisement,” she said. For instance, the Farm Security Administration’s health education program was effective, but it promoted racialized views of culture and poverty.

“The federal government intervened dramatically on behalf of migrant families to promote the principles of American democracy, expand migrants’ civil rights, and make farmworkers visible beyond their role as temporary laborers,” she writes in her outline.

“What we think of as impossible occurred against all odds.”

“In labor camps across the United States, migrant families successfully worked with federal officials to disrupt the invisibility and marginalization historically shaping farmworkers’ experience. This remarkable story, previously unrecorded, offers an important precedent for those seeking to combat the pracarity in farm labor relations today.”

The labor camps became important symbols of America’s commitment to social justice and wartime democracy, yet most think of labor camps as being the homes of Dust Bowl farm families such as the Joads, portrayed in John Steinbeck’s ‘Grapes of Wrath,’ Martínez-Matsuda said. The camps were also home to many non-whites who moved with crops, not just farm families displaced by the Depression.

The camps were controversial and considered by some as a socialist experiment. The camps offered migrant families stability, but were a short-lived utopia; migrant farmworkers in the United States still do not have labor or civil rights, she said.

The migrant experience is personal for Martínez-Matsuda, who grew up translating for her parents, who moved from Mexico to Los Angeles in the early 1970s.

Martínez-Matsuda went to the University of California at San Diego to study marine biology, but switched her major after being impassioned by a history class, which opened her eyes to race and immigrant issues in America. She has been working on the migrant labor camp topic since 2004, when she explored it for her master’s thesis.

The biggest question tackled in the book, which Martínez-Matsuda hopes will help others understand what life in America was and is like for migrant farmworkers, is about American belonging. “How have they negotiated that identity in the midst of continued exclusion and exploitation?”