“Unionization in Big Tech: Why Now?” 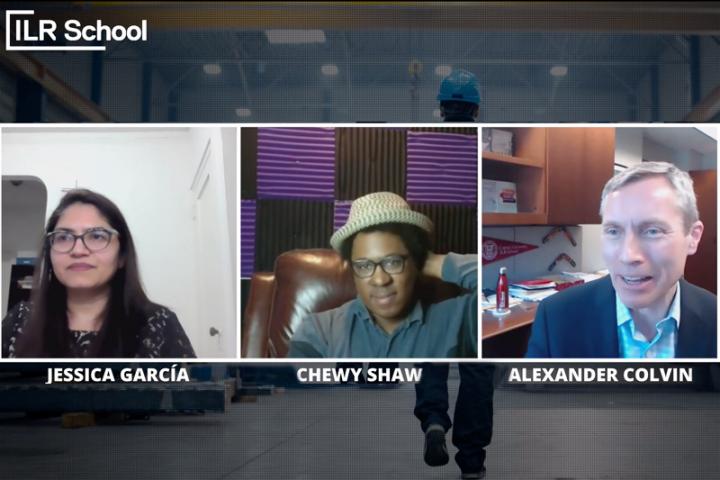 Worker voices at leading technology companies are “really central to understanding what the future of work in America is going to be like,” ILR Dean Alex Colvin, Ph.D. ’99, said at the March 25 kickoff of “The Future of Work: Labor in America” eCornell Keynote series.

“How are we going to shape labor relations in these key industries going foward? It’s a big question for our society,” he said, noting that the national discussion about work has been transformed in recent years.

Many workers at Amazon and Google are alarmed by what they see as unethical management practices, said “Unionization in Big Tech: Why Now?” panelists Chewy Shaw and Jessica García. Nearly 1,000 people viewed the event, archived here.

Shaw is one of the activists who led more than 800 Google workers to form the Alphabet Workers Union. García is assistant to the president of the Retail, Wholesale Department Store Union, which is helping Amazon workers organize in Bessemer, Alabama, where mail-in voting for 5,800 employees ended March 29.

The vote count could take weeks. A pro-union outcome could trigger other drives that some think could help reverse the decline of organized labor. Less than 11 percent of workers in the U.S are union members.

Many Bessemer workers say they are treated like robots, García said. When hazard pay due to COVID-19 ended in June, interest in unionizing heightened, she said. "The fact that they were, in essence, told they weren't essential and they were dealing with all these other working conditions, just really exacerbated the situation for them."

Customers value Amazon services, she said, but are often unaware of employee working conditions, which include timed bathroom breaks.

“Yes, Amazon Prime is awesome, but there should be some standards that should be upheld” for workers, she said. “The company has so much visibility and a good reputation with consumers. We have to do a lot of work to educate folks

A speak-up culture fostered at Google has crumbled in recent years, Shaw said, and most workers now are contract workers who don’t receive the benefits and status of Google employees.

“It’s on us,” said Shaw, who has been a Google employee since 2011, to support the needs of colleagues, whether or not they are contract workers or company employees.

Activists concerned about Google policies consulted with Communications Workers of America to form an experimental “minority union” which did not go through a vote. Rather, people joined individually and contributed dues of one percent of their total compensation.

Shaw said workers were motivated to organize by a number of incidents. “We started seeing, more and more, executives trying to hide controversial contracts from workers, and that made people get really concerned. We started seeing executive pushback, people getting fired for sharing information internally.”

“We want to have the freedom to discuss and decide for ourselves how we want to take part in different projects,” he said. “We can start highlighting situations that we think are important to the public.”