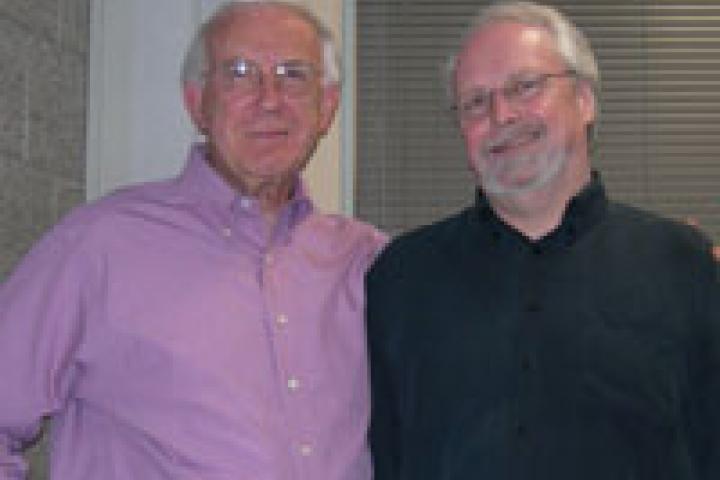 If not for a rainstorm, ILR's Class of 1992 would have been addressed by Professor Clete Daniel.

In that speech, he planned to say, "… the increasingly urgent problems of this country and this world are destined to intrude upon your life with a force and frequency that makes your moral identity the only facet of your true self that has enduring relevance."

That thought led to "… don't hesitate to stockpile especially ample reserves of those uniquely human nutriments that sustain, enrich and ennoble the spirit as well as the mind: tolerance, generosity, understanding, compassion."

Daniel shared these values with thousands of students, in and out of the classroom, during 37 years at ILR. He died in 2010 at age 66.

His 1992 speech (pdf), scheduled for an outdoor ceremony scratched when a blue-sky day turned nasty, was read aloud when three students were honored in May with awards named in his honor.

Nancy Blanks '12 is the first recipient of the Clete Daniel Public Service Award. It will be given annually to a student intending to pursue a career in public service, trade unionism or teaching and who has participated in the ILR/UCD Semester in Dublin Program or the ILR Credit Internship Program.

Blanks, taught by Daniel in her ILR freshman colloquium, begins teaching this fall in Washington, D.C., or Baltimore through the Urban Teacher Center.

Reflecting on his own life, Professor Daniel once wrote, "While it's fashionable today to bemoan the dysfunctional condition of public education in much of this country, it was a system that generally served the children of Alisal (his hometown) … well enough to make a real difference in our lives. Public education was a blessing that only an abject ingrate would look back on as mixed."

Another award, the Clete Daniel Memorial Medal, was presented to Andrew Lew '12 and Bethany de Gant '12. Lew is now working full time for the Directors' Guild of America in New York City and de Gant joined Deloitte & Touche this summer.

The medallion is awarded annually by the School of Business, University College Dublin, to the outstanding student or students of the semester-long program it sponsors with ILR. It was awarded for the first time in 2011 to Evelyn Bing '12.

Beachler noted, "We are extremely grateful to our colleagues, Professor Bill Roche and Professor Roland Erne at University College Dublin for creating this award to honor Professor Daniel. More than 65 students have had the opportunity to participate in this program since its inception, vastly expanding their understanding of international issues in the ILR field."

Daniel founded the ILR/UCD Semester in Dublin program in 2006. He began as director of ILR Credit Internship Programs in 1989.

Quietly, he set an example of giving to others, Gross said. If someone needed a mortgage payment or a confidante, Daniel came forward.

"He was there, with no strings attached. He gave of his time and more, in vast amounts, to people who needed it. He was an extraordinary person."

He was never carried away by his academic stature, though, and had little patience for self-smitten colleagues, pronouncing them "self-promoting careerist gas bags," Gross said.

On a piece of paper taped to the hallway side of his office door, Gross silently reminds passersby of the moral dimension his friend wove into everyday life.

Quoting Daniel, it reads, "Smart is good, kind is better."