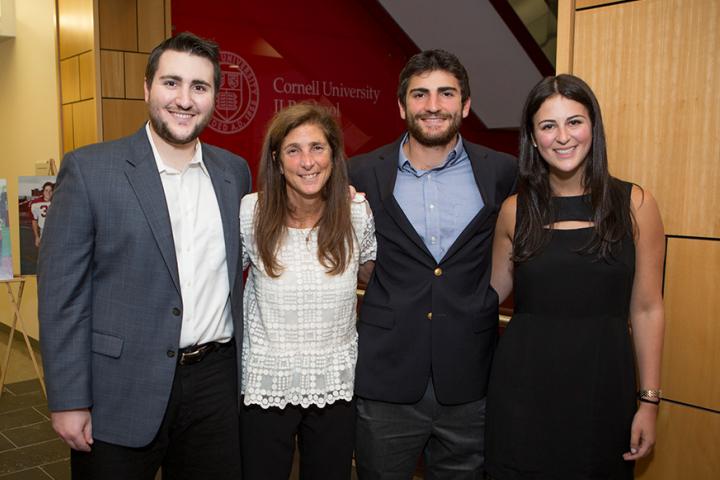 For the Nathansons, the ILR School is a family affair.

Elyse ’80 and Andy ’79 met as classmates in the mid-seventies, though they didn’t start dating until years later. They married and had three children, two of whom also attended ILR — Brian ’12 and Kevin ’17. Their daughter, Alison, graduated from Cornell’s Dyson School in 2014.

“Although Andy and I had a wonderful experience at ILR, we never pressured our children to attend,” Elyse says. “We wanted everyone to find their own path and do what was best for them.”

Nonetheless, the path led back to Cornell.

Brian was attracted to ILR because of the school’s varied offerings, the Cornell campus and his desire to experience Greek life. Kevin, a junior, is studying sports management and business.

Kevin also plays sprint football, just as his father did, and stays in contact with Andy’s coach, Terry Cullen, who remains with the team.

Four of the Nathansons took, and loved, Psych 101. Elyse, Andy, Brian and Alison took the course with Professor James Maas. By the time Kevin was a freshman, Maas had retired. “Kevin was so bummed by that,” Elyse recalls.

The Nathanson siblings have at least one other course and professor in common — Essential Desktop Applications, taught by Christina Homrighouse.

In 2009, as Brian was about to start his sophomore year, Andy, a semiretired financier, died in a surfing accident.

“A few weeks later, I received a call from Dean Harry Katz,” Elyse says. “He wanted to let me know that he was keeping an eye on Brian and that he was okay. I was floored. I couldn’t believe that the dean, with everything else he had going on, had taken the time to call me. And it wasn’t a one-time thing — he kept it up. It was a very personal connection.”

The inaugural recipient is Jefferson Cowie, professor of labor history and chair of the Department of Labor Relations, Law and History. Elyse describes him as “amazing.”

“He makes me wish I was a student again,” she says.

Will a third generation of Nathansons one day attend ILR? “They’ll have no choice at all,” Elyse says with a chuckle.

But, more seriously, she notes, “The school has something for everyone, so maybe they will all go there."