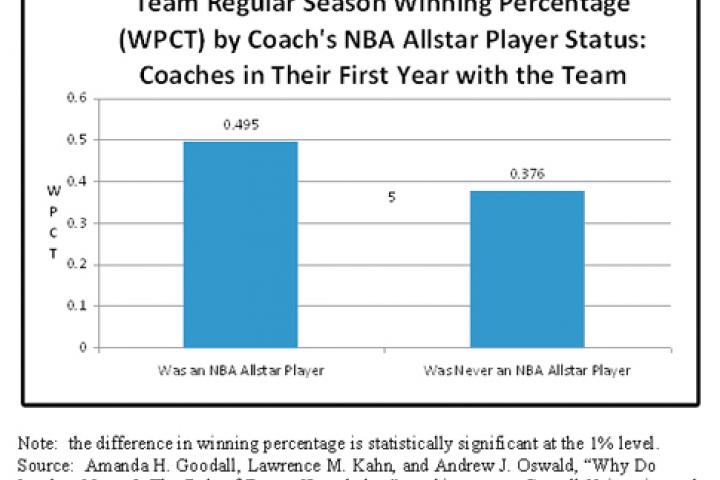 Star players make better NBA coaches, according to research by scholars at Cornell University's ILR School and the University of Warwick.

Using data from 15,000 basketball games between 1996 and 2004, the authors learned that NBA teams tend to win more games if led by coaches who were star players or who had long playing careers. That upholds the authors' hypothesis that – across many kinds of industry – it is experts in their field who typically make the best leaders.

In the current NBA finals, Lakers' coach, Phil Jackson, is tied with the Celtics' legendary Red Auerbach for the most championships as a head coach (nine) and has the second best career regular-season winning percentage (0.700) of all time. While he was never an NBA All-Star player, he had a long NBA playing career (12 seasons), a mark of distinction, since only the best players in the world are invited to play in the NBA. Doc Rivers, the Celtics' coach, was an NBA All-Star player, had a 13-year NBA playing career, and led the Celtics to this year's best record in the NBA, though with some help from the addition of two star players (Ray Allen and Kevin Garnett) to the roster.

While not all former All-Star players had winning records as head coaches, the authors found that on average, "Having a former All-Star player as your coach is worth about six extra places in the NBA rankings in team winning percentage," said Larry Kahn, a professor of labor economics and collective bargaining at Cornell’s ILR School. "We were surprised at the strength of the statistical evidence."

Goodall said, "Forget charisma. Forget the airport-book stuff. Our results are consistent with the common sense idea that organizations need to be led by people with deep expert knowledge of the core business."

The authors speculate that a deeper understanding of basketball gives top-players-turned-coaches a significant edge over other coaches. This may come through better tactics or increased credibility with players, they said.

In the authors' database, coaches who never played in the NBA never made the playoffs in the coach's first year with the team, compared to about half of the teams taken over by a former NBA player, according to the report. Team performance factors, such as player quality, were controlled in the research which led to the finding that star players make better coaches.

The authors' work began as an attempt to understand leadership in general. The NBA is a natural laboratory for testing, they said, because of data availability, small team size and the comparative simplicity of the professional basketball industry.

The authors believe that their results are likely to generalize to many economic and organizational settings. Experts tend to make the best leaders, they said.

Documented in a report entitled "Why Do Leaders Matter? The Role of Expert Knowledge," the research says the beneficial impact of a star-player-turned-coach is discernible during the coach's first 12 months with the team. The report is available at http://www.ilr.cornell.edu/news/061208_NBAplayoff.html.