Inspired by courage of workers 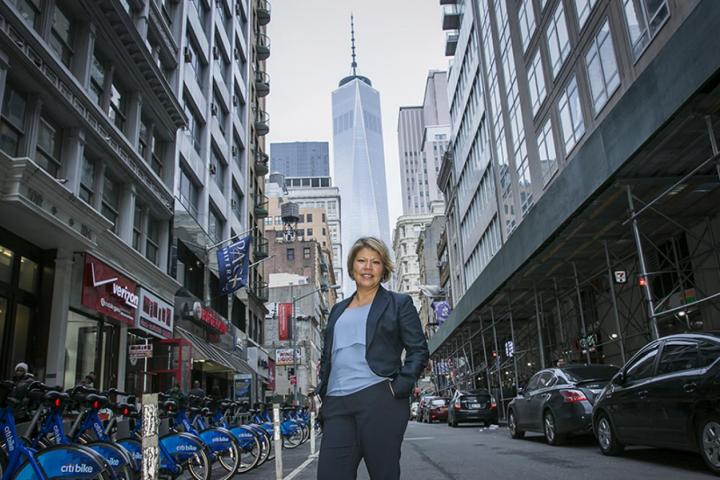 El Salvador’s civil war raged around Patricia Campos-Medina ’96, CIPA ’97 as she grew up.

Government, guerilla and paramilitary fighters terrorized the nation, killing an estimated 75,000 people; her uncle and cousins were among the social justice advocates assassinated.

Her parents were part of the largest migration of Central Americans in U.S. history. Her father moved to America in 1979; her mother followed in 1980 and her oldest brother in 1982.

Her parents’ earnings from cleaning offices and hotel rooms paid their children’s school tuition back in El Salvador.

Campos-Medina and her younger siblings lived there until 1988 with family members, including a farmer grandfather who rallied other growers to press for better prices from buyers.

She saw up close that having a strong voice demanded many united voices. She started to question “why people who work so hard were paid so little.”

Despite their precarious work lives, “my parents were committed to our futures. ‘You have to learn English. You have to go to college.’”

When the family reunited in Virginia, Campos-Medina had four years of American schooling before enrolling at ILR.

“It was an alien world in many ways, but I felt there was a commitment to helping me succeed,” she said, referring to support from ILR and Cornell.

The most difficult moment of her life, she said, came during the 1993 Latino student takeover of Day Hall.

“I barely got here and I got expelled for my activism. I had to make a choice about social justice values. This was my moment to stand for something.”

Campos-Medina has continued standing up through a successful career in the labor movement that led her back to ILR in 2014. As co-director of the New York State AFLCIO/Cornell Union Leadership Institute, a program of the Worker Institute, she shares campaign organizing and political experience with dozens of union leaders each year.

“Things don’t just happen,” Campos-Medina said. “People have to organize and make things happen. You have to be strategic and you have to stand up.”

“In the labor movement, we have more losses than victories. After 15 years, that can get very disheartening. But, at the same time, we have to build from every loss and keep moving forward.”

“I always find inspiration in the courage of workers standing up for their rights. As someone who has had so much opportunity, I need to fight for those opportunities for others.”