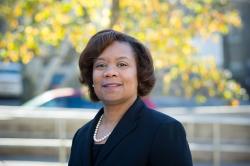 Women will be the driving force behind more than half of the 9.7 million small business jobs forecasted for creation during the next few years.

Some of those women were at Rev Ithaca Startup Works Wednesday to listen as Assistant Professor Michele Williams translated research into practical learning.

Her talk, “The Female Advantage: Sources of Power and the Challenges for Female Entrepreneurs,” covered stereotypes women continue to face as professionals.

Expect and plan for hostile sexism and its gentler cousin, benevolent sexism, where presumptions of incompetence are masked by what appear to be good intentions, Williams advised 40 people in the Rev Ithaca Startup Works in downtown Ithaca.

Groom negotiating skills, since half of one’s time is spent negotiating, she said. Know
That women are lied to more often than men in negotiations “so it is harder for you, you have to do more planning.”

Many women are highly skilled at solving complex problems while remaining respectful of others; leverage that by developing a powerful, diversified network, Williams said.

“The longer you are in business, the more you are perceived as ‘legitimate.’ You are more likely to get credit, and your access to mixed gender networks increases.”

Network as much as possible, she said, sharing a trick for meeting more people -- show up early for events, before people are clustered in groups, and work the room.

Williams, drawn to study women entrepreneurs through her research on trust, dismissed the theory that women sabotage themselves by not asking for raises, recognition, better jobs or more help at home.

“Women ask for things, but they don’t ask in ways that gets heard, or they are sent signals to not ask. The issue isn’t simply women don’t ask.”

Many women are socialized to be modest, credit others, avoid verbal conflicts and value equality in relationships – attributes that can undermine entrepreneurial endeavors, Williams said.

By the numbers, though, emotional intelligence, keen negotiating skills and other assets seem to be working for women.

The Center for Women’s Business Research reports that in 2009, women-owned businesses comprised 28 percent of small businesses in the United States, employed 23 million people and contributed nearly 3 trillion dollars to the domestic economy.