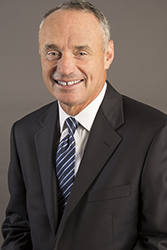 Rob Manfred was elected as the 10th Commissioner in the history of Major League Baseball on August 14, 2014 by a unanimous vote of the 30 Major League Clubs. He officially became the sport's leader on January 25, 2015.  Manfred had served as Chief Operating Officer of Major League Baseball since September 30, 2013. In this role, he managed the Commissioner's Office in New York on behalf of Commissioner Allan H. (Bud) Selig. He worked closely with Club ownership and management executives and has long addressed a variety of the industry's economic, governance and policy issues. As COO, Manfred oversaw labor relations, baseball operations, baseball development, finance, administration and other key areas. He first began working with Major League Baseball in 1987.

Active in professional organizations, Rob is a member of the Labor Section of the American Bar Association, the Massachusetts and District of Columbia Bar Associations and the College of Labor and Employment Lawyers. He also served as a member of the Board of Directors of the Sports Lawyers Association and the Partnership for Clean Competition. Rob was named Labor Counsel of the Year in 2008 by the Association of Media and Entertainment Counsel and was awarded an honorary degree by LeMoyne College in 2010. Rob regularly engages with our students, including a trip to Ithaca last spring right after he began as Commissioner. 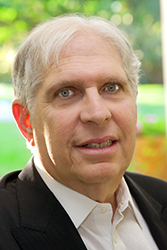 Jonathan Dolgen has been a Principal and senior consultant at Wood River Ventures, LLC since September 2004. Since July 2004, Jonathan has been a private investor. He served as a Senior Advisor of Viacom Inc. from July 2004 to April 2010. From October 2006 to March 2008, he served as a Senior Consultant of ArtistDirect, Inc. From April 1994 to July 2004, Jonathan served as the Chairman and Chief Executive Officer of the Viacom Entertainment Group, a unit of Old Viacom, where he oversaw various operations of Viacom's businesses, which during 2003 and 2004 primarily included the operations engaged in motion picture production and distribution, television production and distribution, regional theme parks, theatrical exhibition and publishing.

Jonathan has served the university enthusiastically over the years, and has been a member of the Cornell Major Gifts Committee since 2005. He is also a life member of Cornell University Council, after having served three terms. He was a founder of the Friends of the Cornell University Theater Arts Center. In 2011, Jonathan, and his wife Susan, were celebrated as Foremost Benefactors of Cornell in recognition of their lifelong dedication to the university. Jonathan has also made it a personal priority to support his alma mater through both service and resources, including the ILR Extension Building (now Dolgen Hall) and a Dean’s fund to be used for the School’s most urgent priorities. Over the years, he has also hosted many events for university leaders, alumni, and prospective students at his home, at Paramount Pictures, and elsewhere.

Jonathan holds a B.S. from ILR and a J.D. from New York University.