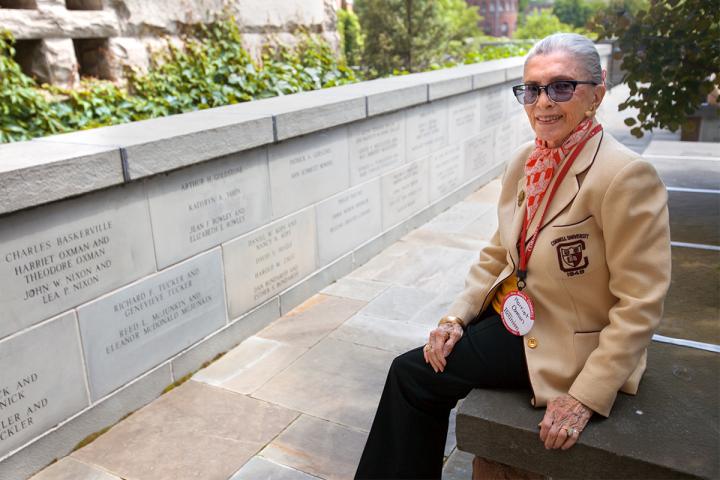 Harriet Oxman ’48 hoped to live to 120. Although she didn’t quite make it, dying at the age of 92, she left an ILR legacy that will last even longer.

In 1945, she transferred into the ILR School’s first class to pursue her interests in history and economics, becoming one of its few women students.

Oxman prized her ILR education and degree. She most valued the world-class professors from whom she’d learned, often citing the influence of Maurice Neufeld, Jean McKelvey and Milton Konvitz.

Although admitted to Cornell Law School, she was unable to attend because of her father’s serious illness. “She was so proud to have been one of the first female law students accepted at Cornell that she kept the acceptance letter,” says close friend Marianne Cowger.

Instead of practicing law, Oxman devoted her life to education and travel.

After graduation, Oxman earned a master’s degree from New York University’s School of Education and spent 27 years in the New York City school system. She taught history, geography and economics, and served as a guidance counselor and assistant principal. In 1972, she was named principal of Erasmus Hall in Brooklyn, becoming the first woman principal of a New York City academic high school.

“During the 10 years I was principal, I didn’t have many grievances,” she said in 2015. “But when I did … I won them all. I attribute that to my ILR education.”

The “Harriet Oxman Papers” from her career at Erasmus Hall now reside with the New York Historical Society, thanks in part to Cowger’s assistance.

Over the years, Oxman traveled extensively and documented every trip. “Wherever she traveled, she was a teacher,” says Cowger, who helped put her handwritten pages into book form. The result was “Around the World With Harriet,” a detailed account of Oxman’s life published in 2014, proceeds of which benefited the Catherwood Library.

Oxman had a passion for libraries. “As a teacher and school principal, she recognized the central place that the library has in the educational process,” says Curtis Lyons, the Harriet Morel Oxman Director of Catherwood Library. “She loved to read books and always had them around.”

Oxman’s relationship with Catherwood began in 1993, after she and her husband, Ted, met Director Gordon Law, with whom she developed a strong friendship that lasted until her passing.

For her 60th class reunion, in 2008, the Oxmans endowed the library’s directorship, which was subsequently named in her honor. “I’ve always felt books were important,” she told ILRie. “At Cornell, I spent a lot of time at the library.”

The Oxmans continued to make significant gifts to the library. In 2012, they were named Foremost Benefactors of Cornell; their names are engraved on the “builder’s wall” on the Uris Library Terrace. To celebrate the designation, she was presented with an Ezra Cornell statue at a meeting of the Cornell Club of Sarasota-Manatee in 2013.

“While her total giving to ILR merited far more naming opportunities than just the directorship, the only other thing she wanted was a bench with her name on it outside Catherwood Library,” Lyons says.

A bench bearing her name also sits at the southeast corner of Manhattan’s Central Park near The Pierre, where ILR hosts its annual Groat and Alpern Awards celebration. On the plaque, she proudly listed herself as “Graduate Cornell University Industrial & Labor Relations ’48.”

Ted died in 2014. During her last visit to campus, in 2018, for her 70th reunion, “she came with a new boyfriend and made sure everyone saw that her winter white Cornell blazer still fit,” Lyons recalls.

“Harriet will be dearly missed,” Lyons said at the time of her passing. “Her legacy will live on in the good work done in her name by Catherwood’s Harriet Morel Oxman directors. Her generous donations will continue to benefit ILR’s students, faculty and researchers in the field of labor and employment for years to come.”

Cowger cites a favorite saying of Oxman’s: “In working with and enjoying young people … the teacher will never grow old.”