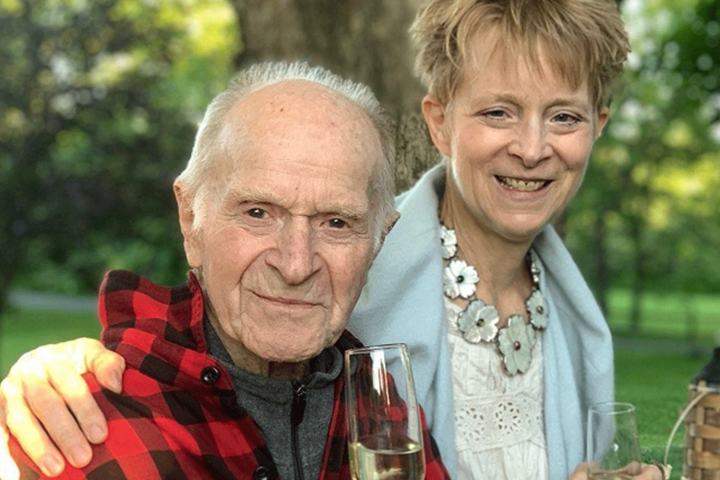 In the 101st year of his adventure-filled life, Harold Oaklander ’52 remains indefatigable.

This summer, he overhauled a collection of antique cast iron stoves and designed an outdoor stairway at his Hudson River home, Klinkenberg, built in the 1680s by Dutch settlers.

His passion, though, remains helping the unemployed. For decades, he has reached out to ILR deans, professors and staff to remind them that the jobless deserve dignity and assistance in finding employment.

Oaklander helped inspire and support “The Fight Against Unemployment: Advocacy and Policy,” a course that began in 2018 and is now taught by ILR Senior Research Associate Ian Greer. It covers topics such as unemployment’s damage on individuals and communities, and what unions and management can do to avoid or manage layoffs.

Through the course, students have opportunities to work with Legal Assistance of Western New York, a non-profit law firm, to assist unemployed people experiencing legal problems and to assist the Tompkins County Workforce Development Board in improving workforce planning.

In 2018, Oaklander was a guest lecturer in the course, which Greer believes is the only one of its kind in the country.

“Harold really wanted engaged learning opportunities, where students work directly with the unemployed, so that they’d gain not only understanding, but also empathy. The unemployment course was set up in a way where students could go to work with Law NY’s Legal Aid local offices advising and representing their clients,” Greer said.

“The Ithaca Co-Lab creates a space for students to work not only directly with the unemployed, but also to be doing research and policy work,” he said. “Also, it’s no longer just about unemployment, but there’s also a stream of ‘living wage’ research

“Harold Oaklander’s commitment to ILR to carry out engaged learning courses on unemployment has been constant for decades now, and it’s an important topic that I’m happy to teach about.” Greer is currently conducting research in Europe, but will resume teaching the course in 2022.

For years, Oaklander connected dozens of students with internships at One-Stop employment offices across the nation. He wanted them to see first-hand the struggles of unemployed men and women. Many who were seeking jobs after layoffs during the Great Recession had no computer skills; ILR students helped them learn how to apply online for a job.

“So much is overlooked about unemployment’s impact,” Oaklander said in a recent interview. “What has been happening these past months is a dual pandemic – the virus, plus unemployment.”

Oaklander’s path to ILR and interest in helping the unemployed began in Kearney, New Jersey, where joblessness was raging while he grew up during the Depression.

Young Harold set up bowling alley pins to make money to buy movie tickets and worked with cyclists at the Nutley velodrome in New Jersey by outfitting them with bike-shoe cleats, fixing their bikes and literally pushing them into races on the wooden oval. He dreamed of becoming an aviator.

Oaklander was doing his Casey Jones Aviation School homework – a light aircraft design – and listening to music at the back of Oaklander’s Pharmacy, his father’s store, when Pearl Harbor was bombed in 1941. He joined the U.S. Navy and was trained to handle seaplane engines in flight. But, “claustrophobia pushed me out of the air and into aircraft maintenance administration,” and he began instructing people in airplane hangar classrooms.

After his war service, Oaklander worked at Aerojet General in the California desert on solid fuel jet engine development. During a testing session, he escaped being incinerated by two seconds, he said, and soon afterward moved back east to Ithaca to work at Robinson Airlines.

Soon, he was exploring the Cornell campus, learning how to use the university library and crossing paths with an admissions recruiter who gave him a one-year trial in classrooms at the ILR School.

Deemed “not college material” while in high school, Oaklander blossomed at ILR, where he completed his studies. “Because of my war experience and older-than-average student age, I was able to establish a closer relationship with a wider number of professors than most students.” He also worked as an audiovisual assistant at ILR, sometimes helping Dean Martin Catherwood with presentations.

Oaklander met doctoral student Chris Argyris, who – years later – encouraged him to join an industrial administration program at Yale’s School of Engineering. After graduating from ILR, Oaklander worked in human resources at General Electric. He took a four-year leave from GE to attend Yale, where he started to think about academia as a career, especially after meeting and marrying a soon-to-be professor of medicine, Dr. Isabelle Rapin.

Over the next few years, Oaklander earned a doctorate at Columbia University and traveled the world. He remembers his ILR background being well received at places such as the International Labor Organization in Geneva and Japan’s labor department in Tokyo.

Most of Oaklander’s academic career was spent as a faculty member at Pace University’s Lubin Graduate School of Business, where he was associate dean and founder of its early executive MBA program.

After retiring in about 1990, Oaklander made many trips by van to Ithaca, where he zipped through the halls of ILR to promote his idea for a course on the U.S. unemployment system. He was also focused on arranging internships for students at their hometown One-Stop unemployment offices and career centers. He was delighted that ILR students were welcomed across the country, recalling the Woburn, Massachusetts, employment office manager who said, “Do not send me an intern again next year, send me a team of ILR student interns”

When COVID-19 forced joblessness on millions, Oaklander worked the phones, reminding ILR people of the importance of assisting the unemployed.

The source of his success through the years?

Oaklander, known as “H.O.” to his family, attributes it to a mix of luck and merit, “and coming directly under the spell of truly great people” such as his wife, Dr. Isabelle Rapin, and social scientists such as Professor M. Harvey Brenner, who Oaklander describes as “the Johns Hopkins/ Yale/University of North Texas faculty member whose two distinct decades of study include the impact of unemployment on individual health and well-being.”

Oaklander also credits Professor Eli Ginzberg of the Columbia University Graduate School of Business. While serving as professor of economics at Columbia, Ginzberg was an adviser to President Dwight Eisenhower, but still found time to advise Oaklander and invite him to accompany him on a trip to Washington, D.C.

During an interview for this story, one of Oaklander’s daughters, Dr. Anne Louise Oaklander A&S ’80, shared her view on her father’s success: “I have a slightly different take. Harold has this outstanding personality that is exceptional. He is just genuinely motivated to help people. The secret to his success is that he never sought success, he just followed his passion.”

Oaklander is also the father of Stephen Oaklander and Peter Oaklander, and of daughter Dr. Christine Isabelle Oaklander, CALS ’81, who, with her siblings, has been working with Cornell faculty and administrators to ensure that her father’s legacy at Cornell endures.