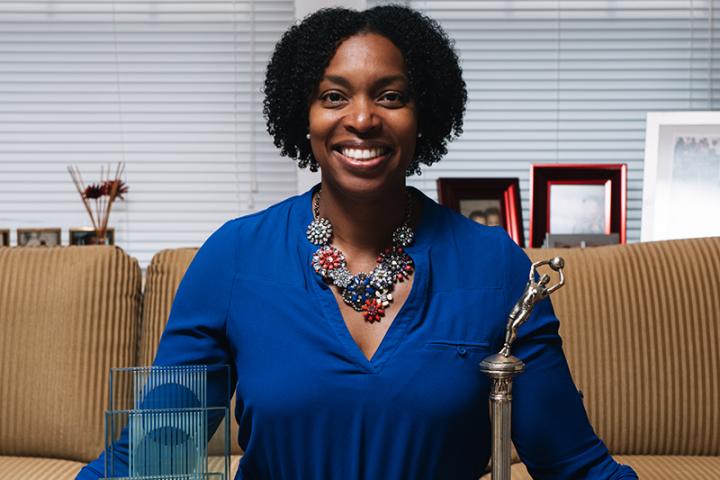 Follow the dream that’s in your heart. That’s what guides Lauren Myers ’97.

“You can do anything you want to do,” said Myers. “I use my degree and people- to-people skills every day to support players — whether it’s negotiating a contract, marketing an appearance, developing an internship or preparing them for a career after football.”

“My goal is to help individuals recognize their next steps when their football career is over.”

Many players need guidance about their post-NFL futures, as well as access to the right people and industries that leverage their off-field strengths, she said. During their football careers, many are so absorbed in league demands that they don’t make a plan.

“I help players recognize and realize their post-league identities,” she said. “I have to be able to drive work for them.” For example, Myers helped Ted Washington develop his foundation, focused on youth and military veterans.

An avid sports fan, she said her late great-uncle, Zachary Clayton, inspires her. During her Cornell years, he would press her to take full advantage of the experience with practice, hard work and perseverance.

Enshrined this September in the Naismith Memorial Basketball Hall of Fame, “Deadeye Zack” played for the Harlem Globetrotters and the New York Renaissance during the 1930s and 1940s.

Clayton also played baseball in the Negro Leagues, competing for the Atlantic City Bacharach Giants, the Chicago American Giants and the New York Black Yankees. He and teammates slept in their cars when hotels refused them rooms based on skin color. Despite discrimination that kept him out of America’s white leagues, “he was able to succeed.”

In 1952, Clayton became the first African-American to serve as a heavyweight boxing referee in high-profile bouts — most notably officiating Muhammad Ali’s knockout victory over George Foreman in the 1974 “Rumble in the Jungle” fight in Zaire.

Myers, like her great-uncle, is doing something she is passionate about and is following his footsteps into the world of sports. Professional athletes’ trust in her guidance is paramount to her business, a privilege Myers does not take lightly.

Myers’ career affords her work-life balance as she raises her children, ages 11, 9, 7 and 4, who see her applying her great-uncle’s advice.

Working in the male-dominated sport industry can be challenging. That's when Myers looks fear in the face, puts it aside, reminds herself of lessons and experiences from her family and Cornell, and says, “You know what? I’ve got this.”