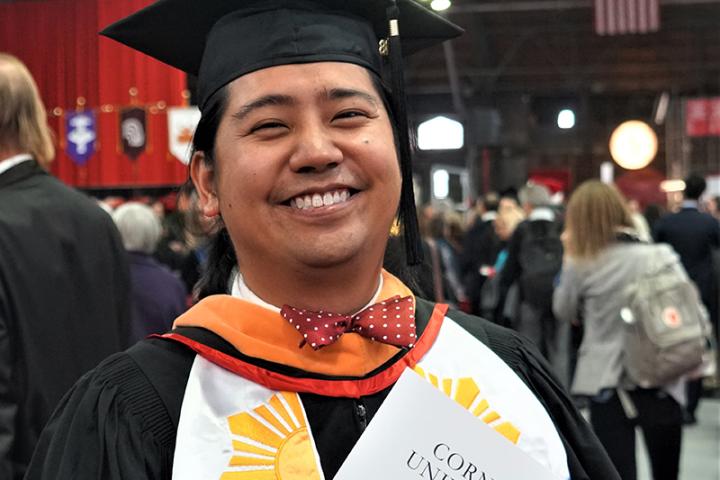 After working in higher education and the non-profit sector for eight years, BJ Siasoco ’07, MILR ’18, wanted to advance his career, but was getting the same response from potential employers: “You don’t have the exact thing I need.”

He considered MBA and public administration programs, and ultimately chose the ILR School's Master of Industrial and Labor Relations Program.

Now an HR analytics manager for IBM and based in New York City, Siasoco is among dozens of ILRies who have returned to their alma mater for the accelerated one-year path to a MILR degree.

Professor of Human Resource Studies Chris Collins, director of ILR Graduate Studies, said the one-year program was started over a decade ago. “We saw the one-year degree as a chance for alums who felt a bit stuck in their current roles to come back to ILR to take advanced MILR elective courses and gain additional experiences that would make them better prepared for a career turn or speed up their path to higher-level leadership roles.”

“Alums can leverage what they learned in the undergraduate ILR curriculum and their work experience, and are able to dive quickly into more advanced topics that enhance their readiness for more senior roles in HR,” he said. “Alums can also build on relationships with faculty members from their time as undergraduates to gain access to unique opportunities.”

The MILR program graduates about 50 in each class, which allows students to build strong peer relationships that create a lifelong support network, Collins said. The program also provides many opportunities to network with senior HR executives that lead to mentorship and career opportunities.

Siasoco credits the MILR program with marrying his interpersonal and technical skills, which helped him elicit authentic feedback from LGBTQ employees about IBM’s inclusion culture.

He pulled from an inclusion course with Professor of Human Resource Studies Lisa Nishii, who is Cornell's vice provost for undergraduate education, and another on training and development. That one, taught by Brad Bell, ILR's William J. Conaty Professor in Strategic Human Resources and director of the Center for Advanced Human Resource Studies, helped him realize organizations often implement inclusion programs in ways that inadvertently "punish" employees, instead of creating space for them to grow and change behavior.

“The MILR program is a powerful way to get you forward,” Siasoco said. “You raise your hand, and a lot of people will come to your aid. You can really connect.”

Katie Coupe ’08, MILR ’13, now vice-president of human resources at BetterUp, said that returning to Cornell to earn a MILR degree has had a strong return on her investment.

“Work experience prior to the MILR was an integral component to better absorb course content; I had a strong understanding of what areas of HR I was truly interested in and that shaped my coursework and on where to focus during the program. I was very intentional about the areas I wanted to pursue.”

During recruitment for a full-time role post-MILR, Coupe felt more confident than before obtaining her advanced degree. “Not only did I have experience sitting at a negotiating table or working as an HR manager at a manufacturing facility, but now I also had a deeper understanding of the technical aspects of the profession. I felt more well-rounded and had clarity about what I was looking for when pursuing my next role.”

“Coming out of the MILR program, my job opportunities expanded. They opened up geographically and it was a great transition point to enter a different industry,” said Coupe, who resides in Austin, Texas. She lived in San Francisco after graduating from the MILR program.

ILR continues to offer alumni “continuous networking and mentorship opportunities with people who are the best in the industry.” After graduation from undergrad and the MILR program, Coupe worked for organizations such as ADM and Gap Inc., where Michael D'Ambrose ’79 and Eva Sage-Gavin ’80, respectively, served as chief human resource officer.

Chris Cruz ’14, MILR ’21, was scouting for the Los Angeles Angels and at a career crossroads when he decided to transition into a new professional future through the MILR degree.

“ILR undergraduate was more about understanding the theory. The MILR degree prepares you to step out and make an impact right away,” said Cruz, now a Long Island-based talent acquisition manager for Toolio, a cloud-based merchandising platform.

“It definitely changed my career outlook. The MILR degree created that signal to companies that I invested in myself and take the HR side seriously.”

“It was great to go back to Cornell and know you could try things in the classroom and have freedom to experiment and receive constructive feedback. Being able to practice with peers in a realistic setting really sets you up to have those conversations in the workplace, and to have influence.”