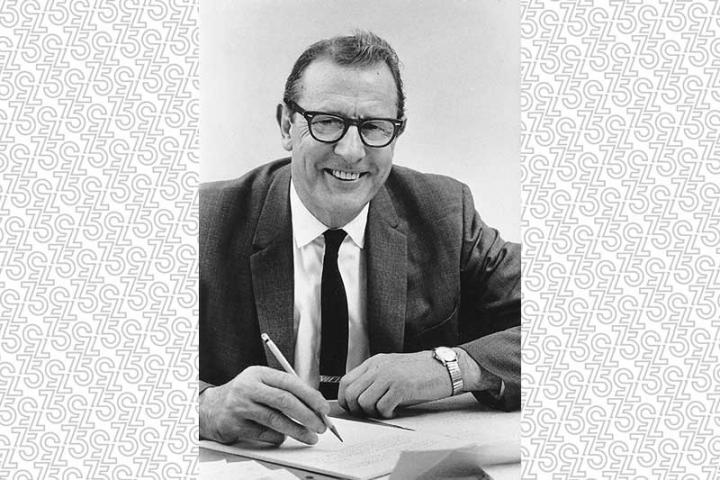 “Pete” Jensen could only find work as a substitute teacher for Salt Lake City public schools after graduating with an undergraduate degree in American history from Brigham Young University in 1932, during the lowest points of the Great Depression.

Jensen began working for the National War Labor Board as a public panel member, mediator and arbitrator and wage stabilization director of the board's ninth region in 1941. He was urged to apply for an ILR teaching position by Phillips Bradley, a member of the “Ives Committee,” the New York State Joint Legislative Committee on Industrial and Labor Conditions chaired by Irving Ives.

Jensen joined the ILR faculty in 1946 to teach labor economics, mediation, arbitration and collective bargaining. He believed collective bargaining was a basic democratic institution based on the rights of individual workers in a democratic society. His devotion to the well-being of individuals and societies was evident in his work as a professor, administrator and scholar.

Jensen helped establish ILR’s core mission, the study of labor relations, during the founding years. He reaffirmed this when he was associate dean in 1965, when the place of labor relations in the ILR curriculum was being questioned by some faculty members.

Frances Perkins, the former U.S. secretary of labor with whom Jensen shared space in the collective bargaining offices above the dean’s suite, ‘told him he had to go ‘downstairs’ because ‘they are wrecking the school.’” Perkins was an ILR visiting lecturer from 1957 to 1965. An excerpt of a lecture by Perkins at Cornell can be heard here.

Jensen, during his tenure, said, “The school was born in the period when collective bargaining had just made its way into our capitalistic society on a large scale after a long, drawn-out difficult birthing.”

“There was much need of a wider understanding of it, both among practitioners and the public at large,” he said.

As associate dean, Jensen supported many curriculum changes as long as they aligned with ILR’s founding roots and anticipated the importance of international labor relations.

Jensen’s multifaceted and “humanistic” scholarship include books “Lumber and Labor,” published in 1945 and “Strife on the Waterfront: The Port of New York Since 1945” in 1973. Jensen’s 1963 “Industrial and Labor Relations Review” article, “The Process of Collective Bargaining and the Question of its Obsolescence," is considered a classic in the collective bargaining field and can be found here.