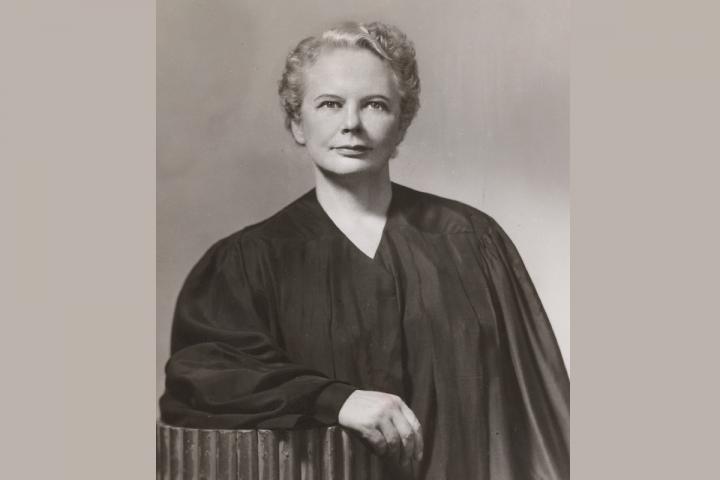 Mary Donlon, a 1920 Cornell graduate, believed that every successful woman should provide “a strong pair of shoulders” on which other women could climb. She expressed her creed through her personal example and her encouragement of other women.

Born and raised in Utica, N.Y., Donlon excelled at Cornell. She was elected to Mortar Board, the senior honor society, based on grades, and eventually obtained a Bachelor of Law degree – legal study was not made a graduate program at the school until 1924. An early indication of her trailblazing was her election as the Cornell Law Quarterly editor-in-chief. Donlon was the only woman elected editor-in-chief at any law school in the United States before World War II.

After graduating from Cornell Law School, Donlon worked at the Wall Street firm of Burke & Burke. At a time when women law graduates were largely frozen out of the New York City market, she thrived, becoming in 1928 the first woman to be named a partner at any Wall Street firm. She worked at Burke & Burke for almost 25 years and was the only woman attorney at the firm during that period.

Donlon also played an active role in the Republican Party of New York state, serving as a delegate to the national party convention numerous times and as a New York member of the Committee on Resolutions that drafted a national party platform. She was the first woman to head a resolutions subcommittee at a Republican National Convention.

Because of her Republican Party connections and service as a Cornell trustee, Donlon was instrumental in the establishment of the New York State School of Industrial and Labor Relations. The idea of starting such a school at Cornell was conceived by Donlon’s friend Irving M. Ives, at that time the majority leader in the New York State Assembly. Donlon acted as an intermediary between Ives and Cornell President Edmund Ezra Day and helped Ives convince Cornell trustees to establish the ILR School.

In 1955, President Dwight D. Eisenhower appointed Donlon judge of the United States Customs Court, his first appoint­ment of a woman to the federal judiciary. In a Washington Post article about her appointment, she said she hoped that the honor would stimulate further appointments of women to the federal and state benches.

Donlon was active all her life helping other women. In 1953, she went to Germany at the invitation of its government to advise women leaders on citizenship training. In 1956, following the crushing of the uprising in Hungary, she established a scholarship to provide aid to any young Hungarian women accepted at Cornell; in 1974, she established the Mary Donlon Professorship in the College of Arts & Sciences, to be filled only by a woman.

Donlon was elected to the Cornell University Board of Trustees in 1937 and 1942 and was the only woman on the board until 1944. Moreover, she was the only woman to be reelected by the board itself, and she served in this capacity from 1946 to 1966. Donlon was also the first woman chosen to be on the executive committee. In 1961, one of the women’s residences built on the developing North Campus was named Mary Donlon Hall.

This story is adapted from “Trailblazing Women Graduates of the Past Century,”  published in the “Cornell Law Forum.”