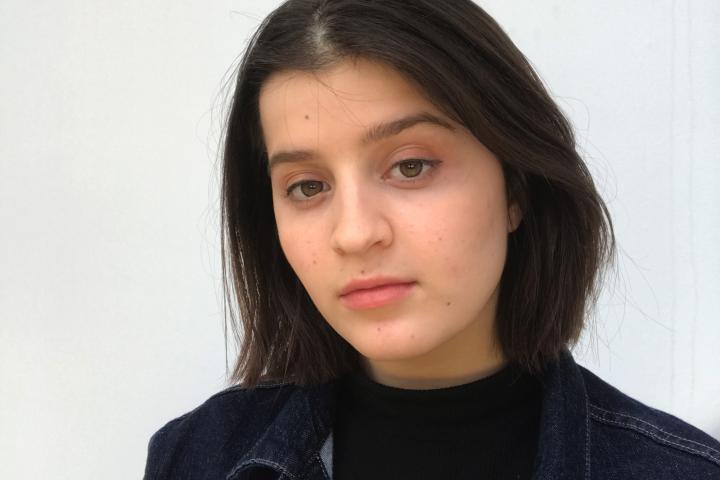 Sophomore hopes “Lupita’s Shoes” will influence people to think more critically about having empathy for immigrants.

Amalia Schneider ’24 is a winner of the 2021 Migrations Creative Writing and Art Competition. The ILR sophomore was one of the six winners of $1000 prizes from Cornell Migrations, a community of migration scholars dedicated to cultivating dialogue and thinking innovatively on global migration.

“Lupita’s Shoes” tells the story of Guadelupe, an undocumented worker Schneider worked with and befriended at her restaurant job in an affluent Philadelphia neighborhood. Schneider describes Guadelupe as hardworking and friendly, a woman who takes night classes to learn English, who works nonstop to support her family in Mexico, a woman who celebrates Schenider’s college acceptance by getting her a carrot cake.

The story details Guadelupe’s day highlighting the mundane parts of her life. “All the stories you see in the media about immigrants always try to pick the most glamorous version to sell and I wanted to pick a version that wasn't glamorous. Like this is a 65-year-old woman who's just trying to live this average life that will make her happy” Schnieder says.

Schneider’s narrative explores the persistent difficulty of immigrant life. She reflects on the glaring inequalities she was unable to ignore at her job. Guadalupe was paid in cash, had her tips withheld until the end of the week and management would not let her be a server, citing her poor English as the reason. Management, which consisted of white men who could not speak Spanish, would also often lay off workers, most of whom were undocumented and Spanish speakers, for illegal and unfair reasons.

When Schneider began researching colleges, she came across an ILR paper on institutional deportability. She cites this as her reason behind her application to ILR as it gave her an academic perspective to what she was experiencing at her job; the vulnerability of undocumented workers to illegal labor practices.

Now the ILR sophomore is a teaching assistant for the “Advocacy and Debate” class, a member of the Cornell Speech and Debate Program and spent her summer teaching kids English in Ecuador through the Latin American Studies Program.

She hopes her short story will influence people to think more critically about empathy.  “We expect so much from immigrants, we expect every migrant in this country to be a perfect person especially when they're carrying trauma of their own. The way we treat immigrants after all that they have been through, how we keep giving them more hurdles to jump through and they have to beg for our sympathy is not right.”

Schneider looks at her future at ILR optimistically. “The point of ILR is to better yourself, I want to better myself to better the world so I can give back and do things that are selfless.”