As the preeminent educational institution in the world focused on work, employment and labor, the School of Industrial and Labor Relations (ILR) generates and shares knowledge that improves the lives of workers and transforms the future of work. 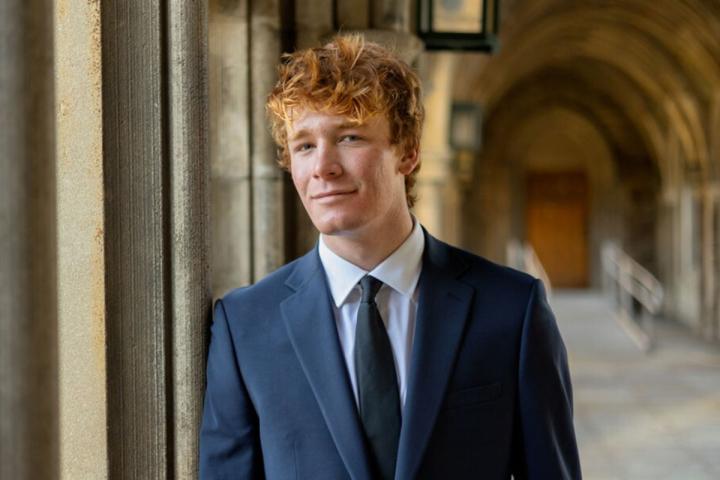 With the holiday break just over the horizon, many ILRies are looking forward to getting some well-deserved rest, eating home-cooked meals and reconnecting with hometown friends and family.

Casey Platkin ’26 will do all those things while also spearheading a grassroots campaign urging San Mateo County to establish an agency to help enforce the county’s new minimum wage law. It goes into effect April 1 and will impact thousands of farmworkers and others in a county bordered by San Francisco Bay and the Pacific Ocean.

Platkin was a driving force behind legislation passed by the San Mateo County Board of Supervisors in November that will raise the minimum wage to $16.50. Without the increase, minimum wage would have continued to reflect the state’s wage base, which goes to $15.50 on Jan. 1.

“The policy had been discussed previously and we were certainly in touch with our local labor council and its executive, but Casey really did help kickstart a more focused discussion,” said David Burruto, chief of staff to Supervisor Dave Pine, who proposed the increase along with Board President Don Horsley.

Platkin was working at his local golf course – driving the machine that picks up golf balls on the range, and then power washing the golf balls, as well as cleaning the golf carts – when he realized that he and his coworkers were making between $1 and $1.50 less per hour than workers just across the highway. He found out that the wage discrepancy was due to the golf course’s location in an unincorporated area, meaning it’s not part of a city and doesn’t have the same type of representation in local government. Platkin learned that unincorporated areas are under the control of the county and that there had been a proposal for a minimum wage increase several years earlier that never went for a vote. After speaking with Pine, Platkin was encouraged by the supervisor’s willingness to put forward a bill if enough support could be raised.

So Platkin spent the next year writing op-eds, presenting at advocacy meetings and collecting endorsements before presenting his minimum wage proposal to the board. When it passed by a unanimous 5-0 vote, he felt “inspired” by what he helped make happen.

“It’s very exciting to me, as a young person wanting to go into policy making, to see the impact that grassroots advocacy can make,” Platkin said.

“A lot of the policy that impacts people's lives comes from city and county and local government, which I think is an important lesson to take away. Thousands of minimum wage workers, from the farm workers who produce our food to the restaurant staff who prepare it, will receive a $2,080 annual raise. In addition, raises in the minimum wage incentivize other companies paying slightly above the minimum wage to raise their wages to stay competitive. The Board of Supervisors has delivered tangible assistance to low-wage workers who suffered the brunt of economic hardships caused by the pandemic.”

“At just 17 years old, I was able to play a driving role in passing a policy that increases the salaries of thousands of workers by thousands of dollars. I hope this success story serves as a reminder of the powerful impact local government and grassroots advocacy can make.”

The work that Platkin has been doing on the minimum wage bill, and now the efforts to implement and enforce the pay increases, are not his first foray into local government. Among working with his Local Elections Office, State Senator, and Congressperson, he was an intern for Emily Beach, who was mayor of Burlingame, California, Platkin’s hometown.

That is how he discovered the ILR School.

“I was assisting Mayor Beach on gathering research on Project Labor Agreements (PLAs) for an upcoming city construction project. PLAs essentially mandate private construction contractors working on a government project to compensate their workers with prevailing wages, healthy benefits, and pensions. A lot of the foundational research on the value of these sorts of Labor Agreements originated at the ILR School,” Platkin said, citing research by Fred Kotler, ILR government relations adviser and research associate.

When it came time to consider colleges, the ILR School was first on Platkin’s list, and he applied early-decision, because “it’s the best place to do labor relations.”

As his first semester on East Hill comes to a close, Platkin recalled speaking to Worker Institute Executive Director Patricia Campos-Medina after an ILR lecture, explaining she gave him valuable advice on the enforcement and implementation aspect of his ordinance, including an introduction to leaders of the labor law enforcement academic community, He explained this has been “invaluable” as he starts this next phase advocacy.

“ILR retains the leading faculty and pioneers the leading research,” Platkin said. “And it's a tight-knit community of extremely passionate faculty that offer those invaluable resources to students.”