As the preeminent educational institution in the world focused on work, employment and labor, we are dedicated to generating and disseminating knowledge that improves the lives of workers and transforms the future of work.
Originally published in ILR Stories.

Graduation Deferred For A Dream 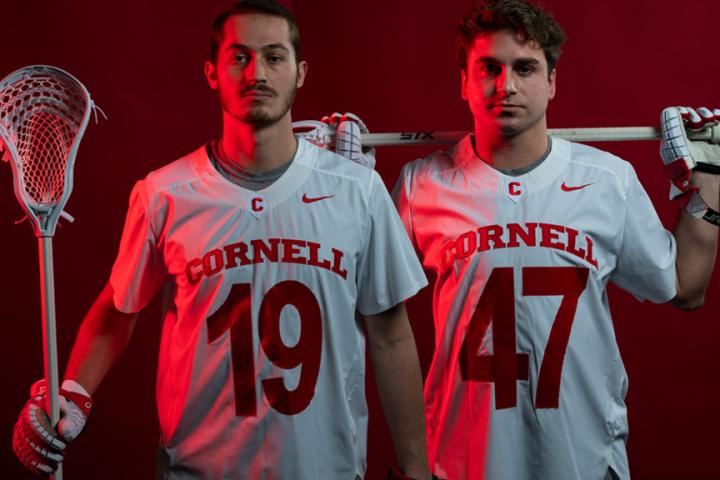 On Saturday morning, 239 ILRies will walk onto Schoellkopf Field for the first session of Cornell’s 154th Commencement ceremonies.

At that same moment, a pair of ILRies – Dom Doria ’22 and Luca Tria ’22 – will be in a locker room 277 miles away, preparing to take the field at Pratt & Whitney Stadium in East Hartford, Connecticut, as the Cornell men’s lacrosse team participates in the national semifinals of the NCAA tournament. It is the Big Red’s first Championship Weekend appearance since 2013.

“Championship weekend and Cornell’s graduation both always fall on Memorial Day weekend, so for our seniors, their goal every year is to have their own private graduation ceremony after the fact,” said Connor Buczek ’15, the Richard M. Moran Head Coach of Men’s Lacrosse. “I think the mindset is always, you order the cap and gown, and you hope you don’t need to wear it.”

For both Doria and Tria, waiting the few extra days to receive their diplomas will be a minor blip, considering both returned to Cornell to use their fifth-year of eligibility after COVID-19 shortened the 2020 season, and the Ivy League cancelled varsity sports for the 2020-21 academic year.

“We started 2020 with a 5-0 record, and I think the toughest thing was just seeing those seniors who didn't get an opportunity to finish what they started,” Doria said. “When the next season was cancelled, my immediate reaction was I'm gonna come back here. You know, I’ve spent a lot of time here and put in a lot of hard work.

"My class as a whole has done a really good job of upholding the tradition and the standard of Cornell lacrosse. So we just wanted to come back and finish what we started.”

If not for COVID-19, both players would have graduated with the Class of 2021. Tria even had a job offer, but when the season was cancelled, and Ivy League rules for fifth year eligibility were considered, both took off the spring 2021 semester and secured internships. The players both credit Kevin Harris, the Frank B. Miller Director of ILR Student Services, with helping them navigate through the changing landscape. Doria worked as a junior analyst at a boutique investment bank, and Tria with an insurance benefits company in Baltimore. Tria also served as the jayvee coach of the Calvert Hall boy’s lacrosse team.

“I already had a job lined up working in financial advising, but at the end of the day I just couldn't leave Cornell on those terms,” Tria said. “And that experience in Baltimore really turned me onto insurance, so I ended up declining my original offer and now I have a totally different job lined up that I think better suits me.

“On top of that, I think the coaching job really helped me as well because the best way you can understand the game is by having to teach it. So I was learning more about the game as I was coaching, and I was learning from the kids. Overall, It was just a great leadership opportunity, and it was also a ton of fun to be on the other side.”

When they returned to campus in the fall of 2021, Doria picked up right where he left off, serving as an integral part of the Big Red’s defense. Over the course of his career, the Massapequa Park, New York, native has played in every game, starting all but a handful, and enters this weekend ranked sixth all-time in Cornell history for career caused turnovers (55).

“Dom has been a guy that has played different roles, both on and off the field, but he’s done it all for us and managed it all very well,” Buczek said. “He’s matured a lot since he got here and at this point we’re getting the best version of Dom, and it’s a testament to how he’s grown as both a person and a lacrosse player.”

Tria’s return to the team, unfortunately, took a turn for the worse when he suffered a career-ending injury in October. Early in his career with the Big Red, the native of Wyckoff, New Jersey, served as the team’s primary back-up face-off specialist, despite the fact that he had never taken a face-off prior to arriving on East Hill.

“My heart broke when Luca got injured to start this year, knowing that this is a guy that put a lot on hold in order to come back for a fifth year,” Buczek said. “But he never missed a beat. He stayed involved in everything the team was doing and found ways to help as best as he could from the sidelines. He knew his season was over early in the year, but he never let that phase him and he just continued bringing a steady, confident, consistent presence to practice every day.

“Both those guys have been integral to our success this season, just in different ways.”

The Big Red is having one of its most successful seasons in years, entering the weekend with a 13-4 record overall. They won a share of the Ivy League title and earned an at-large bid to the NCAA Tournament as the seventh seed. Cornell defeated Ohio State, 15-8, in the first round before dispatching Delaware, 10-8, in the national quarterfinals.

On Saturday, the Big Red will meet the sixth-seed Rutgers with a trip to Monday’s national championship game on the line. Opening face-off on ESPN2 is set for noon – right around the time Cornell’s graduation ceremony will be wrapping up.

“I used to go to championship weekend as a kid,” Tria said. “So, you know, it's just great to be here, as Coach Moran would say.

“It’s really surreal. Sometimes you have to pinch yourself because you can’t believe that you're even here doing something that you've been dreaming of ever since you picked up a lacrosse stick.”

And as for the graduation cap and gown?

“I got it,” said Doria, “but thankfully, it’s not coming out of the plastic!”