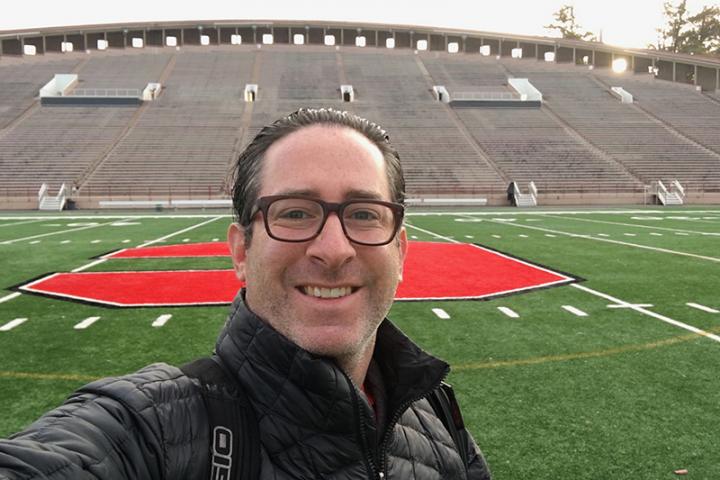 In the spring of 1991, Jordan Berman ’95 was in the batter’s box staring down an opposing pitcher. A then-senior at Clarkstown South High School in West Nyack, New York, Berman was a “middling” player who had trained ferociously all winter to finally make the varsity squad, and he was about to have an unforgettable moment.

Berman turned on a fastball and launched a towering shot into left field. He knew immediately that he hit it well, so he put his head down and tore out of the box, hoping to leg out a double.

“I was running so hard until I saw the field umpire waving me to stop at second base. I immediately thought it must have hooked foul,” Berman said. “But the ump goes, ‘Slow down, son, you just hit a home run’ and I’m asking if he’s sure, because I kept my head down while running the bases and didn’t even see it go over the fence. Plus, I never hit a home run before, except for when I played RBI Baseball on Nintendo.”

Berman sprinting around the bases that day, as opposed to soaking up the moment in a leisurely “home run trot,” is a metaphor for how he lives his life.

Years later, when he proposed to his wife, Elizabeth Schepp, Hotel ’97, MPS ’04, he took her to the Jadite Gallery in Manhattan, where he had persuaded the gallery’s owner to briefly hang a painting of his own design featuring places the couple had been together.

When his oldest son, Dean, became a Cub Scout, Berman volunteered as Tiger Den leader and within two years, rose to Cubmaster, where he inspired the troop to sell over $10,000 in popcorn for its annual fundraiser, a new record. When his youngest son, Nate, played Little League Baseball, Berman coached with such enthusiasm that his son apologized for wanting to quit four years later to try his hand at lacrosse.

It’s with that same enthusiasm that Berman approached his time as an undergrad at ILR in the early ’90s, and continues to support the school today as President of the ILR Alumni Association, a post he’s held since June 2019.

Like many Cornellians, Berman fell in love with the university the first time he saw it.

“As my dad and I drove up College Avenue, my jaw dropped at the incredible sight of Cascadilla Gorge and then McGraw Tower reaching into the sky, and I just thought, ‘this is a magical place,” Berman said. “We went to The Nines for dinner and the thick deep-dish pizza was delicious, and then I saw a band setting up, and I was like ‘whoa’ because I'm a drummer, and then I saw people reading books and conversing. I just had a visceral reaction. I felt like I'd discovered Xanadu and it's called Cornell.”

Berman was so sure he had found the “Disney World of learning” that he applied early-decision – and was promptly rejected.

“I said to my dad, ‘But I belong there! It’s the only school I want to go to,’” Berman recalled. “My mom reminded me that I was still in the regular admissions pool, and several months later, I received the fat envelope, which meant I was in. It was like a validation of all the hard work I put in during my high school years. But, from the first day I got on campus, I felt a need to prove to the ILR School that it made the right decision to let me in. I kind of entered Cornell on a mission to show I was worthy.”

During his four years on campus, Berman was heartened to find that most of his classmates were kindred spirits with a shared “sense of urgency” to accomplish great things. Like Berman, most of the ILRies he met were middle-class kids from New York who were “smart, motivated strivers pushing to make their mark.”

In the midst of this vortex of intensity, Berman credited James E. McPherson, ILR assistant dean and director of the Office of Student Services, for being a “little oasis of calm,” noting that “Dean Jimbo,” as Berman and his friends affectionately referred to him, would always make time to talk with students and provide a respite from the self-imposed pressure of achievement. In fact, Berman celebrated McPherson’s life two years after his passing by naming his son Dean.

Berman was engaged at ILR as a student, serving as secretary of Student Government and regularly manning the grill at the ILR Labor Day barbecue. But after graduation, his involvement waned as he moved to Boston and then Columbus, Ohio. It was Berman’s eventual move to New York City that reignited his interest, when he was invited by the ILR Alumni Association to attend an event welcoming newly admitted high school and college transfer students.

“I wanted to get reengaged with ILR,” Berman said, “but none of my friends were involved in the ILRAA because we perceived it as something for more established alumni who were in traditional ILR roles like HR and labor and employment law. My professional background had been in marketing at entertainment companies like Showtime and MTV.”

At the ILRAA new student event, Berman met Esta Bigler ’70, then president of the group, and the pair struck up a conversation.

“When I met Jordan, I immediately recognized his enthusiasm for ILR,” Bigler said. “Of course, I was always looking for people to get involved, so I encouraged him to join us. His background is in communications, so eventually he chaired the communications committee and was a great fit. He was so innovative. He had a lot of great ideas on how to promote both ILR and the ILRAA, and he just ran with them.”

For Berman, the founder and CEO of OFC, a creative agency and video production studio, it only made sense that his first idea would be a video series entitled, “I Am ILRAA.”

From there, he was off and running.

Since joining the group’s board, Berman has revamped its social media presence on LinkedIn and Facebook, while starting new ILRAA accounts on Instagram and Twitter, complete with the hashtag #FromIvesWeRise.

In the face of COVID-19, he has transitioned all programming to a virtual model, helped Cornell celebrate #StayHomecoming with a virtual cocktail hour and video montage featuring ILRies during their time at Cornell, and spearheaded the ILRAA Board’s gift of $25,000 for Cornell Promise to help meet the financial needs of students impacted by the pandemic.

Berman has also helped introduce three new affinity groups to engage ILRies around specific passion areas, including Sports & Entertainment Executives, Labor & Social Justice and the ILRAA’s newest offering, HR Rising. He also recently produced a special event on “The Role of Media in Society” and collaborated with the ILRAA Minority Council to launch a series of three “Race in the Workplace” virtual events to shine a light on diversity, equity and inclusion.

“If the ILRAA is going to be a relevant and meaningful part of alumni lives, then we have to encapsulate the idea of #FromIvesWeRise,” Berman said. “What we’re saying to our alumni is that you're going to be better because of your engagement with the ILR alumni community. You'll have a better professional network. You’ll stay sharp and learn new things. You’ll socialize and have fun with amazing classmates. And you’ll have opportunities to make an impact on current students looking for guidance on how to bridge their formative years on campus into a meaningful career and fulfilling life. I think everyone is looking for ways to pursue passions with purpose after a pandemic.”

Of Berman’s role on the ILRAA Executive Board, Bigler added, “Without a doubt, Jordan is the perfect president for this point in time. With COVID shifting so many things in our lives to on-line, he has really been able to take advantage of social media, and has used Zoom to build up the ILRAA brand. We are working on a program right now that in the past would have only been a NYC chapter event, but not now. Now it will be all over the world. He’s been really great about putting together a lot of programs that alumni across the country have taken part in during this pandemic.”

Berman’s three-year term as president ends next June, but he’s been encouraged to serve a second term. And, just like that high school senior who was tearing around the bases 30 years ago, he’s showing no signs of slowing down.

Of his time in office, Berman said, “I’m really proud of how the board has seized this unique moment to engage the 11k+ community of ILR alumni. And I’m excited for us to expand our scope with the addition of an external focus to channel alumni skills, expertise and passion for improving our world by combatting misinformation, dismantling division and facilitating change for the betterment of all.

“I love to chase down big, bold ideas and if I think I can make a difference, then I’m gonna rally everyone around me to do something great together! What could be more fun than that?”