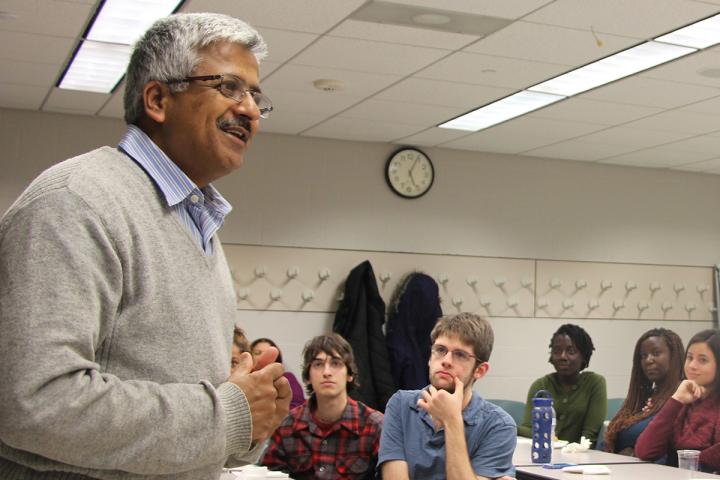 The name of Dr. Ramaswami "Balu" Balasubramaniam has become ubiquitous within ILR since his first interaction with the school 11 years ago.

In 2009, Balu, as he is known at ILR, was completing a fellowship at Harvard’s Kennedy School when Joe Grasso invited him to speak to his class on nonprofit management and finance. Grasso, ILR associate dean for finance, administration and corporate relations, had heard of Balu from Arun Karpur, then an ILR employee. Years before, when Karpur was a  medical student, he worked with Balu through the Swami Vivekananda Youth Movement, the nongovernmental organization Balu founded. “I think you should invite him to speak to your class,” Karpur told Grasso.

After Balu’s talk, Grasso approached ILR’s Office of International Programs about creating an opportunity for ILR students to work with the NGO. Donna Ramil, who now serves as associate director of ILR International Programs, had previously worked in Andhra Pradesh, an Indian state close to Balu’s NGO in Karnataka State. This connection allowed for an immediate bond between Ramil and Balu and the genesis of what is now ILR’s Global Service Learning Summer Program.

The NGO was initially concerned about partnering with ILR undergrads as they had previously only worked with graduate students from the Kennedy School. However, within the first years of the program, it became clear the ILR undergraduate students could offer a lot to the NGO. “The proof is in the pudding, Balu says. “We continue to use the work made by the students. These reports are not simply written and then put on the shelf or library, they actually work and we use them.”

“When some students come down for such programs, they carry this pretense that they’re doing good,” Balu said. “But, Cornell students don’t carry that false pretense. They’re grounded. They’re humble enough to know that they may not know enough and they’re ready to be challenged culturally.”

It is this humility that Balu credits with the longevity of the NGO’s partnership with ILR. “In my 10 years of partnership never once has someone from ILR had a condescending attitude about either India or South Asia. It’s not just people being sensitive, it’s a conviction. I have come to believe that people in ILR have this conviction of equality which goes far beyond the usage of that word, you actually live it.”

As far as the partnership, Balu says that “ILR has never treated me as less than an equal partner. ILR has worked with us to co-create the program, we’re not contractors delivering a service. We both believe that these students can make a difference.”

Ramil concurs, saying that the NGO, known as SVYM, “is an amazing partner. We don’t treat them like a service provider, but instead, we grow together. These kinds of relationships do not happen overnight,” she said. “There is trust involved, giving the other organization the benefit of the doubt, open communication, honesty, wanting the best for you and for your partner. We’re looking at how my process of growth can facilitate your process of growth. Our partnership with SVYM has set the benchmark for all our other partnerships.”

In addition to hosting students during both winter and summer breaks, SVYM and the ILR School collaborate on an annual three-week-long training program in India on program evaluation and policy analysis. Taught by Cornell professors Sarosh Kuruvilla, Andrew Wilford, and Dr. Balu himself, the program has run for five years and is attended by government officials, NGO's corporate executives, and students.

Balu has taught ILR courses for 5 years and was named a Frank Rhodes Professor in 2012. His two courses cover topics including international development, human capital and leadership.”I'm extremely impressed with the kind of commitment and seriousness with which students take courses and actually work hard in trying to understand what I'm teaching. The two courses I teach are quite abstract. It's not easy for undergrads 18- and 19-year-olds to actually wrap their minds around that and I find it very impressive that they're able to do that.”

In addition, “the campus itself is very intellectually stimulating,” says Balu. “We practitioners do not really recognize ourselves as people who can teach and share practical experience in the classroom. ILR has given me the space and time to become an ‘academic-practitioner.’ ILR has shown me that practice can be taught to students and that students want to learn from practitioners. This has tapped into a hidden potential and helped me reach my full potential as a teacher.”

ILR students themselves are an additional element that color Balu’s experience as a professor. “The students, they come to you for office hours and bring in such a rich experience. And when you read some of the assignments and papers, then you know the kind of maturity you’re dealing with. So, to me, it's always been a very energizing experience, intellectually stimulating, and gives me hope.”

Balu has reason to be hopeful because many of his students are now creating the kind of change he taught in class. “Many have become achievers in their own way across the world, and reach out to me as a minister or company owner, and they say that what I taught them works. And to me, that reinforces that I’m actually making a difference, one much larger than I had hoped to. Through my students, I am able to transcend boundaries and reach out to places I never could have imagined.”

“As we are working in partnership with other countries and to develop and produce the vaccines, we are now recognizing the merit in partnerships,” Balu said. “So, whether it is India lifting an export ban on some pharmaceuticals when the United States needed it, or the United States sending India ventilators when India needed them, these things went beyond politics.”

“For the first time, global citizenship demonstrated that you can actually be concerned about humanity on a scale which transcends your bond with some countries,” Balu said. “It also showed that there are countries that need to learn the concept of global citizenship.”

Balu believes that ILR has a role in creating a culture of global citizenship. “The international programs at ILR are not just for the student experience,” he said in a 2013 interview. “I see that as a fulfillment of the mission of ILR itself, an obligatory mandate that ILR needs to impose on itself. It needs to see that the rest of the world doesn’t have the intellectual capital that ILR has got and it is the responsibility of ILR to make sure that this intellectual capital, this knowledge about industrial and labor relations is available to every country in this world.”