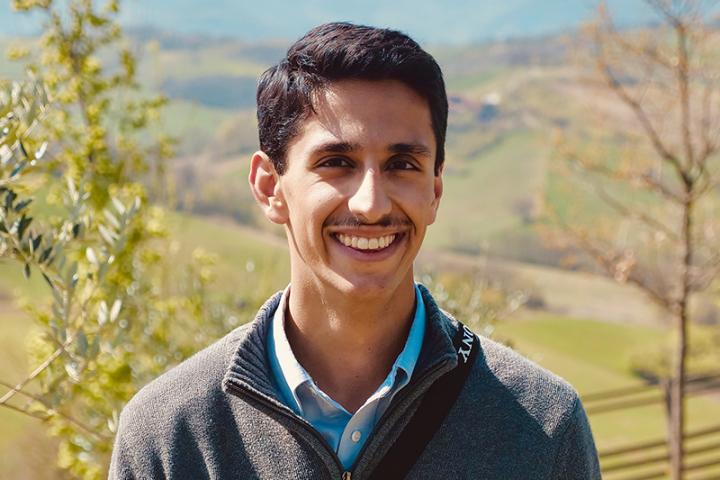 Originally from Colorado, Caleb Harden ’22 was drawn to the ILR School for many reasons. The school’s curriculum has allowed him to combine his passions for law and policy while focusing on the people behind the stories that make up our world.

Focusing on “the people” has driven Caleb’s time at Cornell. He spent this past summer working remotely with the Swami Vivekananda Youth Movement in Mysore, India, through the ILR Global Service Learning Program, as well as tutoring students in New York City through the academic support service Practice Makes Perfect. On campus, Caleb fosters community on campus as an active citizen in Hans Bethe House and a co-leader of a community group with the Christian organization Cru.

Since he was young, Caleb has been captivated by videography. From making home movies as a child with his sister, to doing commercial film work, including promotional videos for Cornell’s Material Science Engineering program, Caleb has spent years cultivating a talent for videography. Inspired by the pain he saw in Cornell seniors when they heard that the campus was closing in March, Caleb, alongside his good friend Daniel Stabile ’20, spent the spring creating a video tribute to Cornell’s Class of 2020.

“It was really difficult to watch my senior friends deal with the sense of loss associated with the early end of the semester,” Caleb said. His video, “So Have We Done in Our Time,” combines the stories of Cornell students, who recount their memories, highlighting their best times at Cornell, the friends they made and their favorite places on campus with shots of campus, emptied of students. In a spoken letter to the students, Caleb encourages students to take strength from the idea that their time at Cornell has prepared them to deal with all challenges, pandemic included. Caleb tells the seniors that he hopes that the video he created will “rekindle hope and extinguish doubt in our ability to endure.”

Here, Caleb reflects on ILR’s impact on him and on the future:

“My time at ILR has taught me to see the good in people and the valuable elements of society, but to also not be afraid to question or probe when you see things that are unjust. ILR has also taught me a lot about valuing the dignity of hard work and has made me realize how much industrial labor has laid the foundation of our democracy. In addition, my time and experiences at ILR have led me to value jobs in which you make an impact, even if that means you aren’t in the spotlight or making as much money as you could earn in a different, more lucrative field.”

“I think it goes back to recognizing the dignity of other people and I hope to combine this with my passion for storytelling to focus on conflict resolution. I had never known about mediation or arbitration before transferring into Cornell and when I found out about them, I felt like a light bulb went off. I always find myself standing in two opposing worlds, trying to find consensus between different groups and I hope to use ILR to build this into a career.”

How might the mission of ILR help shape the next 75 years work, labor and employment?

“I think the legacy of the ILR School is the concept of principled leadership. It’s the idea of someone who can come into a situation and be able to reconcile parties and to bring people together to ensure that people are flourishing in their workplaces. That’s what the ideal ILRie is to me, someone who can treat everyone with an even hand. As the decline of labor unions occurs, more than ever, we are going to need principled leaders in business because they are the only ones who will be able to stand up for workers and make meaningful changes. I think that that was always the purpose of the ILR School -- to develop multi-disciplinary leaders who would safeguard the American Dream for the everyday worker.”