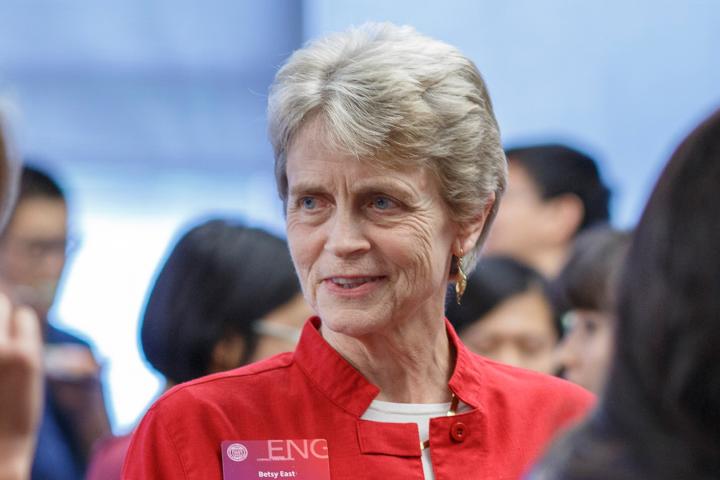 Betsy East, MILR ’89, had a long and distinguished career at Cornell University. She first stepped on campus as the newly hired 28-year old head coach of the Big Red women’s gymnastics team and retired in 2017 as an associate dean in the College of Engineering.

And each step along the way, she was aided by her MILR degree.

“It was a great degree,” East said. “It was great for everything I've done in my career.”

East grew up in Arlington, Virginia, right outside of Washington, D.C. Her mother, Catherine East, was a staff member on the Kennedy Commission on the Status of Women and helped get the Equal Rights Amendment passed by Congress.

“I grew up with people in my living room, like Betty Friedan and Gloria Steinem, because back in that day, nobody had any money,” East said. “So when they came to D.C. to do lobbying and organizing, they stayed at our house. I was in junior high and I was like, ‘Who are these people?’ But, over time, I came to understand who they were, and during my career in athletics, I followed in my mother’s footsteps and was heavily involved in Title IX work.”

When it came time for college, East enrolled at the University of Massachusetts, one of a handful of schools that sponsored a varsity women’s gymnastics team. While there, she helped the Minutewomen capture the 1973 Association for Intercollegiate Athletics for Women's Gymnastics Championship, the predecessor of the NCAA tournament, with a record-setting 105.70 point performance. She also found success individually, as she earned All-American honors with a sixth-place finish on the uneven bars at the championship meet.

East graduated with a dual degree in physical education and pre-med, and then obtained a master’s degree in sport administration. She continued her education at Temple University, where she began working on a Ph.D. in sports psychology and served as a teaching assistant before deciding to “get out in the real world and figure out what I really wanted to do.”

In 1976, she took a job as the head gymnastics coach at SUNY Cortland, where she also taught physical education classes, and was promoted to the role of assistant athletic director of women’s athletics. In 1980, the head coaching job became available at Cornell. East, who wanted to resume working on a Ph.D., knew that Cornell offered an employee degree program, applied for the position.

“Cornell and Cortland had been big rivals so I knew about the Cornell team,” East said. “But, the previous Cornell coach had just sued the school for equal pay. And so I didn't really think they'd hire me because I was involved in all kinds of Title IX deliberations at SUNY Cortland. But, they did.”

East was hired to lead the Big Red program, which she did for four seasons before moving into an administration role as associate athletic director. Shortly after being hired, East enrolled in the educational administration Ph.D. program at Cornell. As part of the curriculum she took several ILR courses, including Organizational Behavior, taught by Professor Larry Williams, and to this day counts it as one of her favorite classes.

“The ILR courses that I took actually were far more relevant to me than the educational administration classes, which were more philosophical, and ILR was more into the practical side of things,” East said. “And, when I got promoted to associate athletic director – you know, when you work in athletics it’s great fun, and I loved it, but you spend your life there. So, I didn't have time to take a course for a few years and one day I thought ‘at this rate I'm gonna have my PhD at the time I retire.’”

So, East took her credits and transferred into the MILR program, earning her degree in 1989.

As associate athletic director, East oversaw half of the Big Red’s varsity sports, including football, a rarity for women in the industry at that time. But after 10 years, and with the retirement of Athletic Director Laing Kennedy '63 in 1994, East decided that she “needed a life” and began working for Cornell’s senior vice president on a project with the director of human resources in the College of Engineering. From there, East moved into a position as an administrative manager in applied in engineering and physics, which led to the director of admissions position in the College of Engineering.

“The admissions director job was great job,” East said. “In so many ways, it felt like athletics in that you see the results of your efforts. One of our big goals was to increase the number of women in the college and I got to build a team of staff, and we increased the percentage of women from 19% to almost 30%. The college now has around 50% women.”

Eventually, East moved into the position of assistant dean for student services and stayed in the role until she retired as the associate dean 14 years later.

Since retirement, she has served on numerous charitable boards, including Hospicare, where she co-chairs the organization’s best-known fundraiser, Women Swimmin’, as well as the boards of the SPCA of Tompkins County and Kendal at Ithaca.

“No matter what I was doing, the courses that I took in ILR were really helpful. And it was also helpful that I had coached a team and I knew how to build a team, but the HR course work that I had in ILR helped me throughout all of those positions. And, of course, at Cornell you have great HR people and they can help you a lot, but it's really good when you know, at least generally, what you're doing. Now that I've retired, and am doing work on committees and boards, it's really helpful to know something about HR, building a team and organizational behavior.