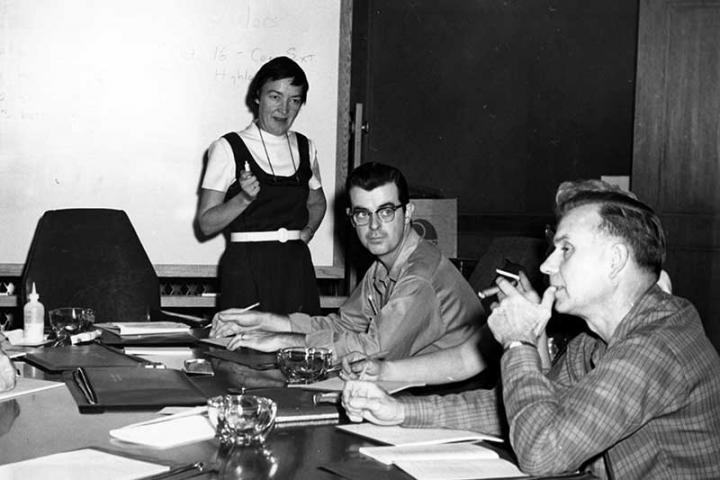 Alice Bacon Grant was a legendary teacher, arbitrator, mentor and friend to many during the 25 years she spent as a faculty member at the ILR School.

A graduate of Wells College, she first came to Cornell as a graduate student and earned a master’s degree in philosophy in 1946. In the 1950s, she was the director of education for the Amalgamated Clothing Workers Union in Rochester, but found her way back to the ILR School in 1963, when she accepted an Extension position. Her commitment and creativity played an influential role in the evolution of ILR Extension as she was determined that ILR should establish an office in Rochester.

With no money in the state budget for this purpose, Grant persuaded SUNY Brockport to make office and classroom space available. To build a library collection, she solicited gifts and invested her own money. Then,she used her political know-how to mobilize support for a state appropriation for staff lines. Through a combination of begging, borrowing, and politicking, she achieved her dream and directed the ILR Rochester office until her death in 1988.

According to Professor David Lipsky, who served as dean of ILR, “Alice was particularly adept at bringing people together, at building bridges and fostering mutual understanding. Those are skills she amply demonstrated, not only in her work as an arbitrator and mediator, but also at the ILR School.”

In 1977, Grant was appointed chairwoman of the New York State Advisory Council on Employment and Unemployment Insurance by Gov. Hugh L. Carey. She served as chairwoman of the state’s Joint Labor Management Committee, which she headed for nine years, and was a member of the National Academy of Arbitrators.

Grant also played a key role in developing ILR School programs designed to train and open opportunities for women and people of color in arbitration and neutral work.

“Alice was a person who always made a difference, not only in institutions, but also in people’s lives,” wrote Lois Gray in 1988. “In addition to her wit and keen analytical mind, she had a fine combination of skepticism and deep idealism. Her creativity and commitment literally influenced thousands – students, teachers, labor and management leaders, and colleagues – and helped to shape the programs and policies of ILR Extension.”

The Alice B. Grant Labor Leader-in-Residence was established in her memory to bring leaders in the labor movement to campus. A long-time supporter of the university, Grant left her estate in trust to Cornell. Her gift, and a gift in her memory from Professor Jean McKelvey, established the first fully endowed chair in the ILR School.