Groshen will be based at ILR’s Manhattan hub 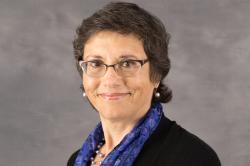 Labor economist Erica Groshen, who led the U.S. Bureau of Labor Statistics as commissioner from 2013 to January of this year, began this summer as an ILR visiting senior scholar. Groshen will lend her expertise to a span of social science research at the school tapping into national data.

John Abowd, ILR’s Edmund Ezra Day Professor of Economics, now serving as associate director for research and methodology and chief scientist at the U.S. Census Bureau, said, “I have known Erica for her entire professional career. Her work is a model for how to combine a deep understanding of the workings of the economy with practical guidance for using the data she has helped produce.”

“Her addition to the ILR community is a real opportunity for students, faculty and our international network of friends and alumni," he said.

Groshen has discussed possible research with ILR’s Labor Dynamics Institute on the cognitive burden of firms and of the people responding for firms, and how it relates to privacy and confidentiality, said Lars Vilhuber, the institute’s executive director.

Vast amounts of digitized data will fuel efficiency, she said, and should be used alongside more traditional sources of information tallied by governmental statistical agencies.

“For most questions, it’s going to be very important to have both. These sources are highly complementary, not substitutes” for one another, said Groshen, who urges individuals and companies to complete the surveys that inform national statistical agencies.

“Agencies rely on voluntary cooperation from households and employers. It’s a form of public service to participate … so many important decisions are based on them,” said Groshen, who will be based at ILR’s New York City offices in Midtown.

As a visiting scholar, her role will also include meeting with students and giving lectures. Groshen speaks Sept. 7 on “Counting the Gig Economy” at a Future of Work series event beginning at 6 p.m. in the ILR New York City Conference Center.

In addition to drawing on her experience as the head of the the primary fact-finding agency for the U.S. government in labor market statistics, inflation and productivity, she will bring insight to her role from her service as a Federal Reserve Bank of New York researcher and vice president.

For most of her career, Groshen has focused on the employer side of labor market outcomes, studying wage differentials, wage rigidity and other areas.

She is watching closely as wage increases remain subdued, despite a tightening labor market.

For now, many companies are opting for more job vacancies, rather than raising wages faster to improve retention and recruitment, Groshen said.

Some firms may say the vacancies are due to a skills shortage, she said. However, another way to see the situation is that they are reluctant to raise wages after so many years when they did not need to in the aftermath of the 2008 financial crisis.

Groshen was honored in June by the Labor and Employment Relations Association with its Susan C. Eaton Outstanding Scholar Practitioner Award.

Groshen, who received a bachelor's degree in economics and mathematics from the University of Wisconsin-Madison and a doctorate in economics from Harvard University, is hoping that business leaders support increased funding in 2018 for the labor statistics bureau.

In an April opinion piece printed by “The Wall Street Journal,” she urged CEOs to speak out in support of the agency.

Continued underfunding of the agency, which provides objective information on unemployment, wage and benefit costs, and other statistics, she wrote, could prove for Americans “the economic equivalent of flying blind.”