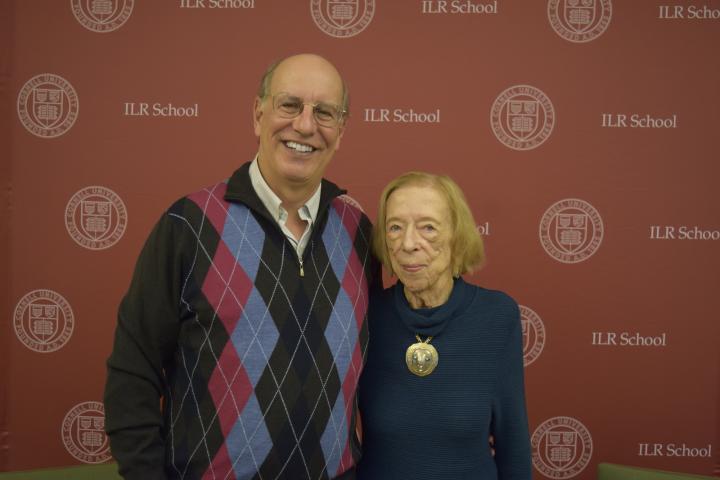 Lois S. Gray, the Jean McKelvey-Alice Grant Professor Emeritus of Labor Management Relations at ILR, has announced the establishment of the Harry Katz Fund for Innovation in The Worker Institute of Cornell ILR, donating $1 million initially.

The fund will "provide financial incentives for collaboration between resident and extension faculty in relation to priority programs of The Worker Institute”, and it will ensure faculty, researchers and students have the opportunity to fulfill the institute’s mission of advancing worker rights and collective representation.

“The Worker Institute is one of relatively few institutions aiming to bring together research with training and education to focus on worker rights and collective representation,” said Gray. “This fund is designed to ensure the continuation of [this] work and to aim for excellence and impact in future activities of The Worker Institute.

The Worker Institute at Cornell launched in 2012 with the idea that strong worker rights and collective representation are essential elements of a vibrant, prosperous, and democratic society. Through research, education and public discourse, The Worker Institute applies innovative thinking and problem-solving approaches to the workplace, economy and society in the interest of working people and their families.

“As Dean, Harry Katz supported and implemented the The Worker Institute, which would bring together resident and extension faculty specializing in worker rights and collective representation under one structure, thereby encouraging synergy,” said Gray. “The fund is formed in that same spirit and his name symbolizes that.”

Harry Katz, Jack Sheinkman Professor of Collective Bargaining in ILR’s Department of Labor Relations, Law and History, says he is “profoundly honored to have [his] name associated with [Lois] and the generous gift she has provided to the ILR School and The Worker Institute.”

“One of the pleasures of being at ILR for over 30 years is that I have had the opportunity to get to know Lois as a colleague and a friend. During my deanship, for example, she was a constant source of helpful advice. She is remarkable in so many ways, that it would be impossible to me to succinctly summarize her virtues,” Katz said.

Lowell Turner, academic director of The Worker Institute, said “this generous gift from Lois Gray is especially important at a time when efforts to advance worker rights and collective representation – our core mission – face many obstacles.”

“We have learned from Lois to take Cornell’s land-grant public service mission seriously and much of our client base is resource poor and greatly in need of support,” said Turner. “This endowment expands our capacity for innovative research, education and public engagement on behalf of workers and their families, with an underlying goal of reducing the vast economic inequality that undermines social cohesion and democratic vitality.”

Gray joined ILR in 1946 and went on to direct ILR's first extension office in Buffalo. She moved to New York City in 1956 to direct the ILR Metropolitan Extension District Office. In 1976, Gray became Associate Dean and Director of ILR's Extension Division.

One of the pioneers of the modern field of labor education, Gray was among a group of labor educators who established the University and College Labor Education Association (UCLEA), the professional association for labor educators, now the UALE. She was the first woman to serve as president of UCLEA and went on to develop the UALE Women’s Summer School, which recently celebrated it’s 40th anniversary.  In 2013, Gray was honored with a Lifetime Achievement Award by the UALE.

As Jean McKelvey- Alice Grant Professor Emeritus of Labor Management Relations at The Worker Institute, Gray continues her research on collective bargaining, women in the labor movement and the arts & entertainment industry. In 2010, the Lois Gray Professorship of Industrial Relations and Social Science was established in recognition of her founding role at ILR. She is ILR’s longest serving faculty member.