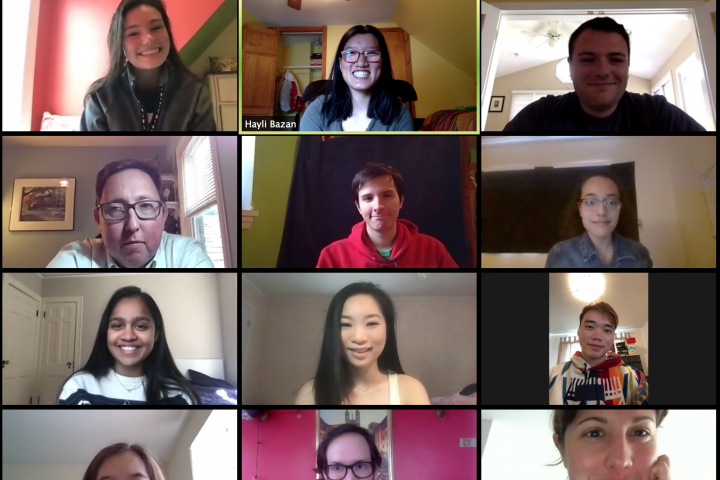 On Tuesday, September 29th, the Scheinman Conflict Resolution Club (SCRC) held its first virtual event of the semester. Student researchers Pearl Ngai, ILR ‘22, and Sarah Rim, ILR ‘20, presented to undergraduate and graduate members of SCRC. Their presentation illuminated notable barriers to entry for diverse labor arbitrators, such as discriminatory socioeconomic requirements needed to become a lawyer (which is often considered a prerequisite for entering into the arbitration field), and arbitrator selection processes based on an “Insiders club”. Their presentation also took members through recommendations like mentorship which should be pursued as a first step to alleviating these barriers to diversity.

Ngai and Rim also acted as mentors for members who might be interested in conducting their own research with the Scheinman Institute. Members had the opportunity to ask questions about Ngai and Rim’s experiences researching virtually, and the path they followed to become student researchers with the Institute.

Club leadership thought this was a fitting event for many reasons, one of them being the importance of discussing and emphasizing diversity in this current period of racial unrest. SCRC Members can look forward to learning more about Alternative Dispute Resolution (ADR) through knowledgeable guest speakers during this semester and next.

Learn more about their research below:

I began my research with the Scheinman Institute on Conflict Resolution under the supervision of Katrina Nobles and Ellen Gallen Procida early in the summer. In light of coverage regarding not only the murder of George Floyd at the hands of the police, but the deaths of Ahmaud Arbery, Breonna Taylor, and Tony McDade, I was interested in finding ways I could synthesize my potential research question with the tide of current events and the Black Lives Matter Movement. Specifically, I was struck by the different ways in which organizations and businesses were responding to the national conversations on race. Early on in my process, I stumbled upon a statement issued by President Nielsen on behalf of the National Academy of Arbitrators, a major institution specializing in labor and employment arbitration.

In his letter, “President’s Statement on Institutional Racism”, Nielsen addressed not only the national protests but also expressed his hope that arbitrators affiliated with the National Academy remain diligent to upholding democracy and justice through professionalism free of prejudgment. Notably, in the last paragraph of the statement, Nielsen suggested potential initiatives the National Academy could implement to better address the striking lack of racial diversity found in the organization’s membership, a base composed of 90% white individuals and 80% men. This letter and its final section greatly informed my research and pushed me to think critically about how the racial dynamics present in the field of Alternative Dispute Resolution (ADR) came to be. With my research, I also looked into how the National Academy (a giant in ADR) might reimagine its membership selection process to become more intentionally inclusive.

There exists a wide variety of variables and unique challenges that people of color face when attempting to enter the field of labor arbitration. For example, a common pathway into arbitration is a legal career—yet the cost of attending law school in and of itself is such a high barrier to entry that commonly, even if unintentionally, discourages underrepresented individuals from entering the field at large. Historically there is also a tight knit culture in the field of labor arbitration—who you know is king and your credibility is of utmost importance. For new arbitrators, however, attempting to enter a gated community is a daunting task.

Through more diligent research and conversations with professionals of the labor arbitration field, I came to the conclusion that, of all the proposed suggestions fielded in President Nielsen’s to address the lack of diversity within the National Academy, intentional mentorship was the strongest shift towards a more equitable future. While mentorship is very commonly enforced through informal means within the field, my research indicated that formal mentorship programs, such as the American Arbitration Association’s Higginbotham Fellows Program, have not only showcased incredible success but have also directly addressed the barriers that so many individuals face when trying to break into the field of arbitration. Mentorship breaks through a culture of exclusivity, has consistently allowed younger arbitrators to build and broaden their networks, and has allowed younger arbitrators to feel empowered through their work.

Ultimately, increasing racial diversity within not only National Academy membership but within the ADR field will greatly expand the breadth of perspective and thought covered in arbitration. It will also fuel a greater appreciation for the differences that makes each professional unique within the ADR community. Mentorship that brings about diversity can ensure a greater degree of confidence in parties receiving arbitral services such that the life experiences of any and all will be respected in the process, and this legitimacy in the eyes of parties is priceless. There is truly no time like the present for the National Academy (and broadly the field of ADR) to acknowledge that, though the past cannot be changed, reimagining and moving towards a future in which racial justice prevails in priority and in practice is the next best step forward.

The Lack of Racial Diversity in Labor Arbitration: An Analysis of Arbitrator Selection

Diversity poses an extremely important issue within the Alternative Dispute Resolution community, and particularly that of labor arbitration, due to its nature of providing a different remedy or legal recourse for employees. However, the lack of diversity in arbitration poses a key issue of fairness as the workforce is not accurately represented in this population of decision-makers in the workplace. There is the pipeline issues of supply and demand of minority  arbitrators within the ADR community where the pool of candidates that go into  arbitration—made up of retired judges or law firm partners—also experiences the same problem  of diversity as these high positions are rarely held by people of color. In addition, some research findings indicate that the shortage of qualified, racially diverse arbitrators can deprive minority claimants of meaningful representation due to unconscious bias. Therefore, an inaccurate  representation of the workforce in the demographics of arbitrators, and broadly, the ADR  professional community showcases grave implications for minority claimants and may work  against the very principle that ADR is founded upon, to provide an alternative legal remedy.

In this research project, I conducted a preliminary investigation into the extent of the lack of racial diversity in labor arbitration through the analysis of the process of arbitration selection.  Through my interviews, I identified the following key considerations in arbitrator selection: (1)  experience of the arbitrator, which calls for seasoned professionals in order to get the best result  for a client; (2) perspective and viewpoint on cases, which implicates looking into prior decisions  and professional affiliations; and lastly but not least, (3) style and demeanor, which can be  attributed to presentation or writing style and reputation amongst the community. The singular, most impactful criterion in the selection process is an arbitrator’s reputation and name recognition. However, the emphasis on name recognition makes it extremely difficult for newer and minority neutrals to gain more experience and be selected for more cases.

There have been greater efforts by agencies to diversify rosters, yet the greater burden falls on parties during arbitrator selection to see any diversity progress. A recurring idea is to  increase mentorship efforts on the behalf of ADR providers, but identified in one of my  interviews, a shortcoming of mentorship is how mentors cannot provide newer arbitrators with  gaining familiarity with selecting parties, such as advocates, and cannot definitively influence  one’s name recognition in the community. Therefore, after my analysis of the arbitrator selection process, mentorship cannot be the sole solution to increase diversity as it comes down to the parties selecting the arbitrator. The industry must recognize that all key players—ADR users,

providers, and arbitrators (both new and experienced)—must come together to develop and implement collective efforts.

One way to do this is to have the increased sponsorship of mock hearings, awards, and conferences to increase networking opportunities between minority arbitrators and ADR users.  As current arbitral organizations’ rosters do not include any explicit demographic information, it would be helpful to coordinate events with professional organizations focused on minority groups to increase accessibility and name recognition. Similarly, the recommendation that  arbitrator appointing agencies provide easy access to published writing opinions of minority  arbitrators will support and spotlight professionals who need more name recognition; and on the  other hand, arbitration users must put in the effort to research and consider newer and/or  minority arbitrators by due diligence of an arbitrator’s background. One element that individual  minority arbitrators can control about their experience is to seek out opportunities that bolster  their reputation, and expertise within the ADR community by becoming an expert for a certain  type of case, industry, or topic by seeking academic or scholarly achievements, such as  publishing a book.

My research this summer is the first step in my understanding of how the current parties in the ADR industry need to improve directing its diversity efforts by doing so together. With my  paper and participation in the Scheinman Institute ADR Roundtable on Diversity as well as the  Scheinman Conflict Resolution Club panel, I thank everyone involved who allowed me to  potentially provide more clarity into the complex layering process of arbitrator selection, which  was made possible through my interviews with advocates and arbitrators that vary in perspective  on this topic.