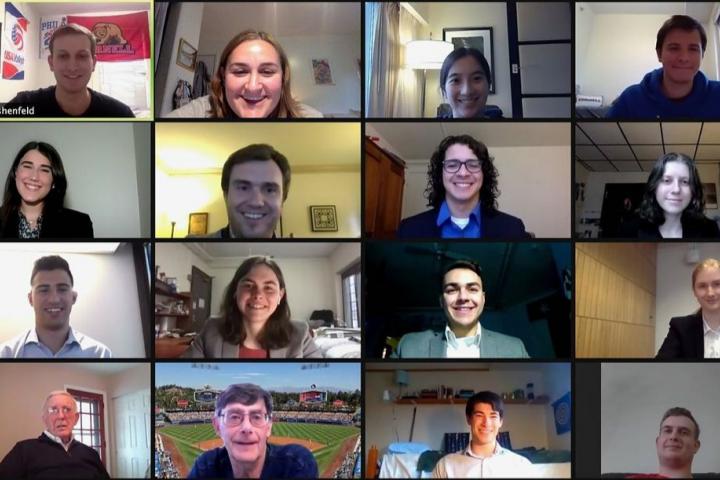 On April 1st, members of the ILR Sports Business Society (SBS) and the Scheinman Conflict Resolution Club (SCRC) squared off in a Mock Baseball Salary Arbitration. Professors Ariel Avgar, Lawrence Kahn, and James Gross formed a tripartite panel to evaluate how each team presented their side of the mock arbitration case.

Here is a conversation with Agnes Goldin, one of the participants for the SCRC side, explaining the process.

What are the components of a mock baseball salary arbitration?
Well, from my understanding, arbitration is a form of alternative dispute resolution, so it’s like bringing in a third party to settle a dispute or work through a salary agreement instead of going to court. Before going into this, I had no idea specifically about MLB arbitration; I just knew generally, ok, final offer, all the things I had learned in labor relations.

So, specifically, with the mock salary arbitration, what goes on is one party is filing for, in this case, the player. We, on the other hand, SCRC, were representing the club. The point is for you to file what you believe is the best salary reflecting six criteria in salary arbitration. For the club, we filed at 4.2 [million dollars], the player filed at 4.6, so that sets the midpoint at 4.4.

The midpoint is the most important part because in the arbitration, the arbitrators will pick above or below the midpoint, so like a penny above or a penny below. Whatever side they choose wins the arbitration—there’s no, like, winning, but the salary will then reflect the numbers of that side instead of the other.

You talked about this a little already, but who participated in this event?
For the SCRC we were coached by Rob Pannullo, who was amazing: such knowledge, such wisdom, he helped us through the whole process. (Rob Pannullo is an attorney, and when he was at Cornell he was a quarterback on the varsity sprint football team.) So he was our coach, and then it was me, Rocco Scarselletta, Genevieve Kelly, Grant Kelley, and Brendan Klein representing SCRC. And then SBS had Anna Clemson, JP Spak, Katherine Faiola, and Sam Schneider. We represented the LA Dodgers, and their team represented Max Muncy.

So what led you in particular to choose to participate?
Well I had joined the Scheinman Club because I’m very interested in law, and I saw conflict resolution as a different avenue to do that.

It was really interesting to see a different kind of conflict resolution that doesn’t revolve around the courtroom, and how settlements could be made outside of the legal setting. So, being in the club for a semester or two and then having this opportunity arise, and arbitration being something I’m interested in going into in the future, I was like, “Oh, a mock arbitration, that could be something really cool, that could give me a good idea of what the process looks like, how the dynamics work, what it’s like being in the room—it was a Zoom room, of course—but getting that hands on feel of what arbitration is like, first-hand.”

And even though it was baseball salary arbitration and I, before this, had no idea about anything baseball related, I just knew you hit the ball and run… I think it was really nice to be able to delve into a topic that you may not have known much about. It’s a new challenge. So, for me, I just wanted to get that firsthand experience, to try it out, and I really enjoyed it! It was really, really cool.

Would you mind talking just a bit more about the preparation process?
We worked with Rob Pannullo throughout the entire process: he gave us a little bit of a crash course on the baseball arbitration process because that’s what he does for a living.

We were able to go through what it looks like, how the dynamics are in the room and what it normally looks like in a regular year. For our preparation, what we did was we had to find players who were comparable to our player, Muncy, and look at the different statistics in comparison to him and build our case as to why Muncy should be making a salary closer to 4.2.

As Rob would say, you’re building a story, so you’re crafting how you portray to the arbitrators that these players particularly reflect Muncy more than what the other team is gonna present. We had to break down all the statistics, do comparisons, look at season contributions and see how long all of them have been in the major leagues compared to the minor leagues.

Then there was the PowerPoint, coming up with what statistics we’re gonna use when we make a graph, looking at how we’re gonna build our argument to make it seem like the more reasonable choice to the arbitrators. So there was just a lot of research, a lot of thinking through different things, and really trying to figure out how do we build that story, how do we show that they should go with our side.

What do you think was the most effective thing the Sports Business Society did to build their side of the story?
Hmm, well I really did like the way that SBS was able to reflect that storyline. I liked how they started off with a theme, just like what are your main points, it’s like writing a paper. So for them, Muncy is a diverse player, he was able to kinda rise from the ashes, he was able to get himself into the major leagues in 2018, and they portrayed that in the beginning and that was their constant. Every time they spoke about something, they brought it back up again. It was like their re-emphasis on their main points, which I thought they did a really great job of. It was very compelling.

What do you think was the most effective thing that your side, the Scheinman Conflict Resolution Club team, did to build your story?

I think one of our biggest strong points was our ability to remind the arbitrators that even though there’s what the other side is presenting—yes, Muncy is a great player, and we as the club are very happy to have him on our team because he does very well, being that just recently got to the major leagues, which is very commendable—what we succeeded on was that we were able to walk the line of recognizing Muncy as a great player, but also expressing that in salary arbitration, just regardless, you’re not just basing things on ability.

It could be the best player in the world, but it depends on the different comparable players and what they’re being compared to. One of our main points was that Muncy was missing a season of contribution that our biggest comparable player, Jake Lamb had. So since he was missing that season of contribution, we felt that his salary should reflect that. It’s important to see that normally the player would be in the room, and you can’t just say “oh they’re terrible, that’s why they should be making nothing.”

I think what we did a really good job of is effectively conveying that we appreciate him as a player and we’re lucky to have him on our team, but you can’t just solely base it on that. There’s all this other stuff you need to take into consideration when picking a salary, especially with all of the previous precedents set by other MLB players and what they get salary wise. One of our strongest points was just being able to walk that fine line of, he’s great, but he needs to have a salary that reflects his level of experience in the MLB.

What was the most enjoyable part of this process?
There were so many! I think I speak for all of us on SCRC in saying that this was all something that we had never really done before, and we didn’t know much about it. But we were able to work through it, come up with a presentation, come up with a valid argument and portray that to an audience.

It was something new, and being able to dive into something that we didn’t know about, working through the issues, and spending a lot of time on it, putting our all into it speaks to our team’s ability. It was really nice to have a group of people who could give it one hundred percent. It was really nice to get to know all of them too; one of the best parts was to be able to get to know people on a different level and be inspired by everybody’s work ethic and just really deep dive into something none of us were initially comfortable with.