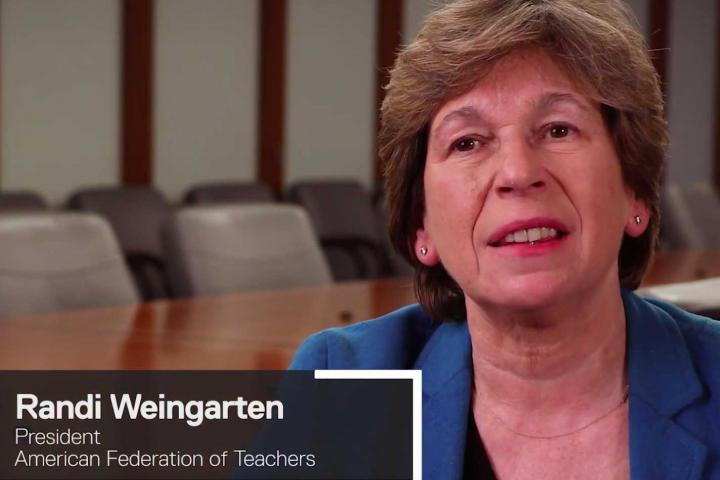 Gemma Abels, president of the Morgan Hill Federation  of Teachers, looked across the table at the school board representatives while negotiating the latest union contract and told a story about a sixth-grade teacher who didn’t have the time to properly prep for upcoming classes. Rather than lead with a discussion of numbers and budgets, and facts and figures, Abels simply emphasized its impact on students and the ramifications of overloaded teacher schedules.

The humanistic approach, which Abels learned while participating in the American Federation of Teachers (AFT)- Scheinman Institute Collective Bargaining Certificate Program, helped her make her point, and the contract negotiations concluded successfully. Of course, Abels had a good grasp of the budgets, costs and figures, which were also integral to the negotiations.

“The training taught us to prepare for our negotiations, and that includes understanding specific challenges facing our member teachers and telling those stories as part of the collective bargaining strategy,” said Abels, who represents 410 teachers in her district, in Morgan Hill, California, about 15 miles outside of San Jose. “Most of the teachers who come into union leadership have never done this before, and to be honest, many don’t believe they have the capacity to do it. Being taught by distinguished faculty at the Scheinman Institute gives us confidence and the skills to negotiate successfully.”

The Scheinman Institute, which has worked on leadership development with the AFT since 2013 (the ILR School has worked with the AFT for more than 20 years), created the Collective Bargaining Certificate Program with AFT leadership in 2017. The AFT’s goal was to better develop local leaders and revitalize local unions by supporting the collective bargaining efforts of its 3,000 local teachers’ organizations.

The training covers all aspects of collective bargaining, from research preparation to development of proposals, negotiation strategies at the table, writing contract language and the discussions of salaries. During the program’s first two years, nearly 200 local union leaders will have participated in the program.

“After our training with the Scheinman Institute, our staff  and member leaders have become much smarter about the process,” according to Michael Mulgrew, president of the United Federation of Teachers (UFT), the New York City-based teachers’ union and the largest local education union in the country with approximately 200,000 members. The UFT is also a partner in the Collective Bargaining Program, contributing staff and resources to the collaboration.

The ILR School has run nationally recognized certificate programs in collective bargaining for more than 40 years, according to Sally Klingel, director, Labor-Management Relations, at the institute. “Because of our work with many organizations in the public sector – in education, health care and government – we were uniquely suited to customize a collective bargaining certificate program, working closely with our colleagues at the AFT and the UFT.”

Randi Weingarten, president of the AFT, which has a membership of 1.7 million public sector professionals, said, “Collective bargaining is one of the most important levers of power a union has and, therefore, a union president must be intimately involved in the negotiation of any and all contracts. While they rely on staff and outside professionals, union presidents need to understand what to do and how to do it. The ILR School carries a lot of weight around collective bargaining and I couldn’t think of a better partner than the Scheinman Institute.”