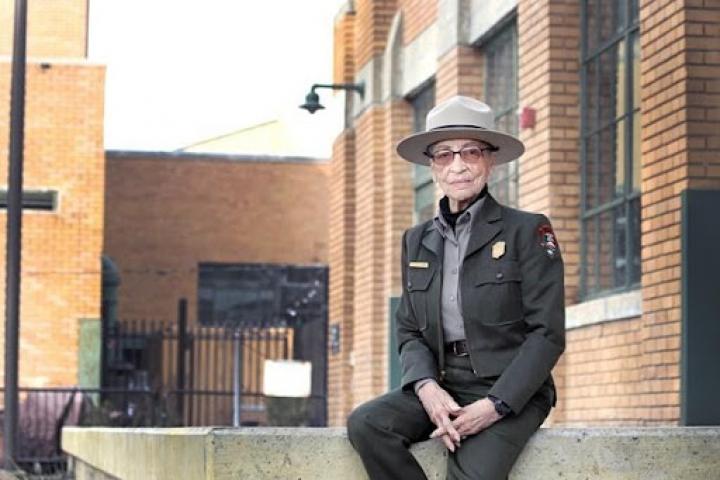 As reported in the New York Times (‘America’s Oldest Park Ranger’ Is Only Her Latest Chapter - The New York Times (nytimes.com)) on September 22, 2021, our nation’s oldest U.S. Park Ranger celebrated her 100th birthday. She was honored on September 26, 2021 at the site of her official post where she continues to guide visitors and give lectures at the Rosie the Riveter World War II Homefront National Historical Park in Richmond, California.

I met Betty Reid Soskin at the National Historical Park, the site of the Kaiser Shipyards in Richmond, California, just east of Berkeley, where, during World War II, a workforce of 90,000, which included white men and women, African American men and women built the Liberty Ships that are credited with playing a decisive role in the U.S. defeat of the Axis Powers.

Today, Betty has become a celebrity, with major write-ups in the New York Times, the subject of a full length documentary film, (No Time To Waste - Official Film Site (notimetowastefilm.com), and awarded the Medal of Freedom by President Obama.

Most important, Betty worked in the shipyards as a young woman.

Her experiences there and during the rest of her life as an African American help shape the overall theme at the National Park where she now proudly serves. That theme is that we must not accept the one-dimensional “myth of Rosie the Riveter” as projected in the posters and photos of the period. That myth, promulgated in popular media and in government films portrayed the “Rosies” as housewives who were temporarily filling in for the men in factories who had gone off to war.

The National Historical Park weaves a more complex story: that the workforce of women, men, African Americans, and many disabled people struggled for dignity and respect. Through those struggles, each group were both committed to winning the war, and simultaneously struggling against the indignities of racism, sexism, segregation, and exceedingly difficult work under harsh conditions.

It is a story of shared purpose and unity, attained at great cost and great learning and evolution. There is so much to learn from this early experiment in the diverse workplace of the future.

In February, 1942, Eleanor Roosevelt said in response to the fall of Singapore to the Japanese forces (this defeat occurred after the fall of Hong Kong, Burma, Malaya, the Dutch East Indies, and the Philippines, while in the Atlantic the U.S. was losing the battle to German submarines.) “Perhaps it is good for us, to have to face disaster because we have been so optimistic and almost arrogant about our expectation of constant success. Now we shall have to find within us the courage to meet defeat and fight right on to victory. That means a steadiness of purpose (emphasis added) and of will which is not one of our strong points. But somehow, I think we shall harden physically and mentally as the days go by.”(Doris Stearns Goodwin, No Ordinary Time, Franklin and Eleanor Roosevelt: The Homefront in World War II, Simon & Schuster, New York, 1994, p. 317)

The fortunes of the war depended on shipping, both warships, but more importantly supply ships. “From building fewer than a hundred ships a year, the U.S. Maritime Commission was now charged with building 2900 ships right away, from dealing with 46 ship ways it was now responsible for 300; from thinking in terms of 100,000 men, and it could soon count on more than 700,000. In peacetime, the training period for a ship fitter was to serve a four year apprenticeship; the training time was now reduced to 7 weeks. It gives you a feeling like holding a hand grenade after removing the pin”. (Goodwin, p. 318).

The government turned to Henry Kaiser who had been involved in building Boulder Dam, the Grand Coulee Dam, the Oakland-San Francisco Bridge and many other major highway and construction projects, although he had little experience in ship building. Roosevelt turned to Kaiser because he grasped Roosevelt’s rule that “energy was more efficient than efficiency”. (Goodwin).

Kaiser established shipyards up and down the West Coast all part of the mass mobilization across the country of the millions of people, many of them women and African Americans who had for the first time entered the largely white man’s world of industrial production. The history of the Richmond Shipyards is part of a larger story, the story of the Homefront.

As detailed in Connie Field’s award winning documentary film from 1980, “The Life and Times of Rosie the Riveter”, we learn that the “myth of the Rosies”, the notion that women happily joined the industrial workforce to perform duties in the same subservient fashion as the way they worked in the home, was far from the truth. As documented in the film and portrayed in oral histories, documents, and testimonials from women workers at the National Park in Richmond, in fact, women eagerly and successfully took on the hard work and highly skilled jobs, earned good wages, joined unions, and in many cases did not want to return to the home, yet were forced to leave these jobs when the men returned home from the War. The “Rosie’s” were the beginning of the modern feminist movement on a grand scale. 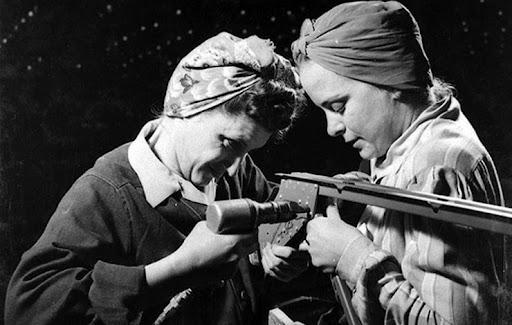 They fought the indignities heaped upon them from male counterparts and supervisors, from insults about their alleged inferiority as workers to all forms of harassment.

Racism and segregation was the reality for African American men and women workers in the shipyards and factories of the Homefront.

Betty Soskin reminds us that all of the African American ship builders had “helper” stamped on their Union cards. This was done so that in anticipation of the return of the largely white male workforce after the War, the African Americans would be forced out of jobs though they were experienced journeymen.

In this beautiful and moving 4 minute film created by Betty Soskin you can feel and learn the struggles of the African American workforce in the war years at Richmond. But she also makes clear that while suffering racial discrimination, the new workforce learned about unions, learned new skills, and proudly participated in the War effort. In doing so, the African American workforce built a sense of pride they had not known before, a pride of self and a pride of participation in common purpose. 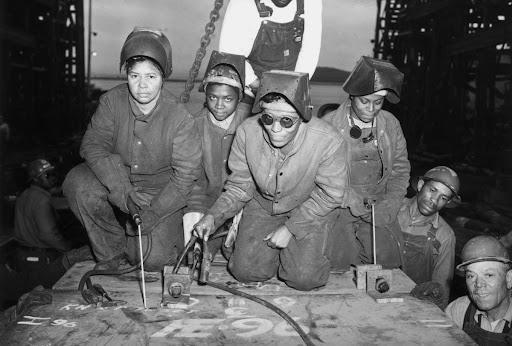 Watch the film, “Of Lost Conversations”.

A parallel story is that it was at the Kaiser Shipyards where the new pre-paid preventive health plan known as Kaiser Permanente really began. When the War ended, and the shipyard workers went home, the new health plan lost 75% of its members, leaving the health plan without sufficient funds to continue. It was union members who went to Henry Kaiser and demanded that the health plan continue by opening to the public.

Tens of thousands of union members up and down the West Coast, led by the International Longshore and Warehouse Union (ILWU) joined the health plan. The health plan expanded to the retail clerks and many other unions, and the beginning of the long partnership between labor and Kaiser was underway.

Kaiser Permanente marks its official birth from that point in 1945. Today Kaiser Permanente is the largest not-for-profit health plan in the nation with a unionized workforce of 120,000 serving 12 million patients.

This is yet another story of complex, multi-layered shared purpose.

Today, Kaiser Permanente remains a major backer of both the creation and sustaining of the National Historical Park. When I was Executive Director of the Coalition of Kaiser Permanente Unions I took a great interest in the Park and assisted in garnering Union support for the Park.

In this picture, taken during my tenure as Executive Director of the Coalition, I am proudly standing with Betty Soskin and Lucy Massie Phenix, the editor of the film, “The Life and Times of Rosie the Riveter” during a visit to the National Historical Park in its early days. 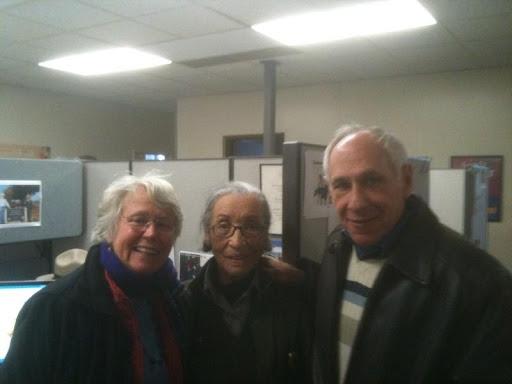 This is a rich history.

It is a story and a history of Purpose in that time, to win World War II.

One of the recurring themes at the National Historical Park is: “must we have war to find purpose?” Are there not innumerable needs we have in peacetime to find purpose, unity of purpose, shared purpose to rally around?

How and whether or not we solve the existential issues of climate, income inequality, racial and gender justice, and high quality health care, education, housing, and time for rest and leisure for all, describes the “war” we as a people are in today. The defeat of the impact of the Coronavirus has been called a war.

This National Historical Park in Richmond is the only national monument in the nation that honors the workers of the Homefront, without whom the soldiers, sailors, marines, airmen and airwomen could not have successfully gone into battle. Yet, the real story, the one that Betty Soskin helps tell is that the workforce of women and African Americans was not allowed to be unified. There was racial segregation in the workplace and in the Unions, and women were not looked upon as equally qualified to perform work traditionally done by men.

The Park does NOT romanticize the unity at the Shipyards. Rather, the Park’s exhibits make clear that women, both African-American and White, as well as the African-American male workforce found new forms of pride and dignity in the struggle against discrimination and unfair treatment while keeping in mind the overall PURPOSE to win the War.

In the stories of the people who lived through the “searing, soul-searching time of World War II” as Betty says in the narration of the film, “Of Lost Conversations”, we can learn about the greatness in all of us, no matter our differences…and thereby see our common interests and shared purposes.