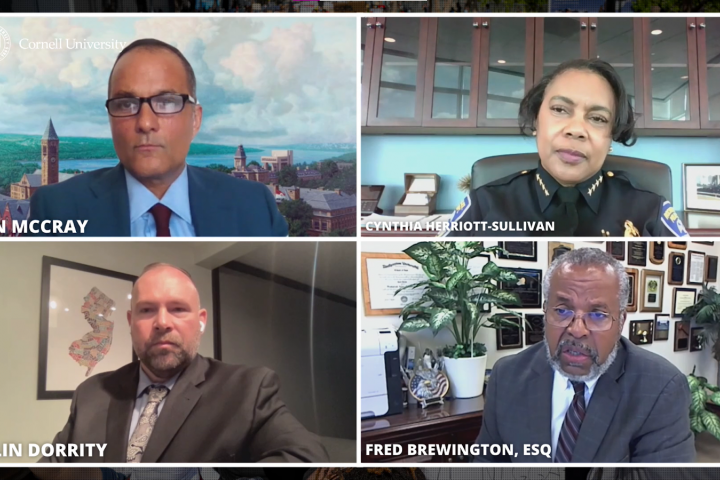 Dan McCray, Director of Labor Relations Programs for the Scheinman Institute, hosted an important and timely discussion on police reform. Featuring panelists with varying perspectives on the police reform debate, the conversation focused on what is being done at the departmental level to address police misuse of power, as well as what can be done going forward.

Civil rights lawyer Fred Brewington introduced a proposal called “The People’s Plan,” which he said “has been touted as one of the better and well researched plans across America.” The plan was created to combat “the systemic, institutional and individual injustices created by a biased and racist policing system.” Brewington explained that it came about as a result of community dialogue, which sets “The People’s Plan” apart from some other reform initiatives. He added that there are many communities that did not have a discussion. They refused to engage, despite data showing that there were levels of racial disparity with regard to arrest, with regard to use of force, with regard to traffic stops, and with regard to hiring. All those things are relevant, he said.

Brewington went on to describe the benefits of independent review boards which allow citizens to “police the police,” and how a lack of outside oversight played into Officer Derek Chauvin murdering George Floyd in May of 2020. “We saw that [Chauvin] had a history of different types of abuses, different types of problems, and nothing was done. Nothing was changed.” He stressed the need for a truly independent body that has the ability to discipline officers. With outside oversight he added, a culture of reliability and accountability can be created when complaints are made.

Sharing her perspective, Interim Chief of the Rochester Police Department Cynthia Herriott-Sullivan said that the issues surrounding American law enforcement are broader than the actions of police officers. “We’re definitely dealing with some issues, problems, and concerns, but I see this as a bit of a concern with the overall criminal justice process,” she said. She explained that while police are the face of the criminal justice department, when abuses occur they often wouldn’t occur unless all parts of that process were complicit. Herriott-Sullivan then shared her vision for holding police accountable. This approach involves “working on being transparent, developing and maintaining trust and being vigilant.”

These include: ending the use of “quantitative metrics” to evaluate police officers, ending “stop and frisk” culture, requiring officers to receive 20 hours of training on conflict resolution and de-escalation, providing training on “peer support” and creating a working group to retain, promote and recruit Black and Latinx Officers.

Dorrity said that, in the wake of Officer Derek Chauvin murdering George Floyd, “there were many officers that are represented by the union who were approaching myself and other leaders in the union who weren’t really sure they wanted to be in law enforcement anymore. Many of those people are the folks we need to stay in law enforcement to help us improve and get better. We thought we needed to take some concrete steps towards immediate reform, some of which we have been pushing for some time, particularly with respect to ending the use of quantitative metrics and evaluations for officers.”