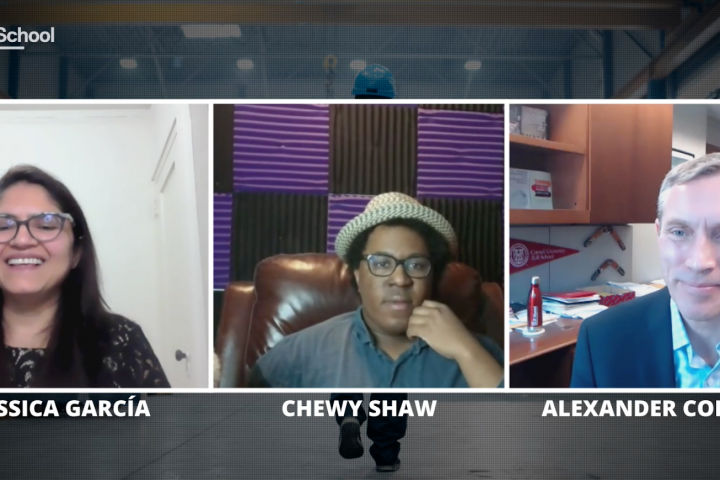 The discussion featured Jessica Garcia, who is assistant to the president of the Retail, Wholesale and Department Store Union (RWDSU), a national labor union representing workers along the food supply chain as well as workers in non-food retail and healthcare.

Garcia previously served as RWDSU’s deputy political director, where she worked to advance the union’s legislative and political agendas. She has also served as director of programs and organizing at New Immigrant Community Empowerment. She spent her early career advocating for fair funding for public schools in New York City.

The other panelist was Chewy Shaw, vice chair of the Alphabet Workers Union, who is a site reliability engineer at Google. In Silicon Valley, an anti-union environment, he helped lead more than 800 engineers and other workers at one of the world’s largest organizations. At Google, which employs more than 260,000, workers have increasingly sought changes on pay, harassment, and ethics policies. The Alphabet Workers Union is affiliated with the Communications Workers of America union.

Shaw personalized his own union organizing experience working at Google, where contract workers are viewed as “not deserving the same quality of life as the rest of the workers.” According to Shaw, an example of this is how Google would differentiate the contract workers with red badges and pushed for distrust between contract and non-contract workers. He described how this created a foundation for the creation of the Alphabet Workers Union.

Garcia explained the origins of the recent vote on whether to form a union at an Amazon warehouse in Bessemer, Ala. She discussed how although Amazon is at the forefront of the high tech economy, a lot of the issues workers were experiencing within the warehouse were similar to other companies within the old economy.

Learn More and View the Discussion.