Innovation in Labor Management Dialogue: In the Epicenter of the Pandemic 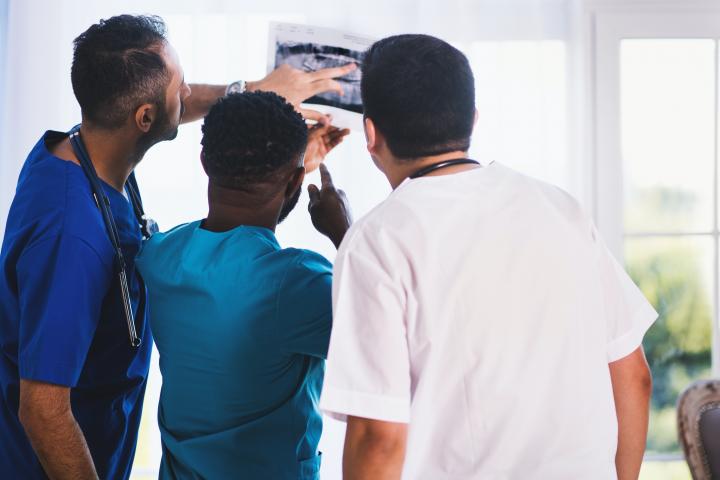 John August is the Director of Healthcare Labor Relations at the Scheinman Institute.

Each year the UHFBYC, the nation’s oldest federated charity founded in 1879, honors outstanding achievement across the region through its Excellence in Health Care Award,“recognizing quality improvement champions, and celebrates the New York metropolitan region as a center of excellence and honors extraordinary personal leadership to improve quality of care, patient safety, and patient experience of care.”

Dr. Venugopal is a member of Doctors Council SEIU.  Along with her colleagues from all 21 of  NYC Health + Hospitals facilities,  she has been a founding leader of the Collaboration Councils which function in each  of the system’s  11 large medical centers, 6 Diagnostic and Treatment Centers (the heart of the system’s outpatient work), and 4 skilled nursing facilities.

The Collaboration Councils have come a long way.

In 2013, new leadership at Doctors Council, the largest union of Attending Physicians and Dentists in the nation, with members in New York, New Jersey, and Chicago surveyed its membership with assistance from Cornell-ILR. That survey indicated that along with its traditional role, members expected their Union to lead on gaining a voice for its members in the quality of care for the patients and community they served.

Based on that survey, and the development of a White Paper entitled, Putting Patients First through Doctor and Patient/Community Engagement, Doctors Council entered collective bargaining in 2014.  That round of negotiations produced an Agreement in 2015 on Collaboration Councils.  Councils were launched in all facilities in 2016.

It is common that new collaborative agreements take time to take hold in many traditional labor-management settings.  In this case, the health system had its own long-standing and institutionalized approaches to quality improvement and quality assurance that did not include frontline staff in the selection or development of projects.

Many of the Councils struggled; others found ways of making progress, largely through a relentless effort to identify improvement projects that were developed by frontline staff.

By the time the pandemic hit New York City harder than anywhere in the world, nearly all work in the system turned its attention to the endless line of seriously ill patients coming through the doors of NYC’s ONLY public system!

With this brief narrative in mind, it is more than notable that Dr. Venugopal won the prestigious Excellence in Healthcare Award for her role in “Co-chairing the partnership between the hospital and the physicians’ union”.

Her award is an indicator that the Collaboration Councils have become an integral part of the functioning of all of the facilities in NYC’s public health system.  Since the “surge” in COVID-19 cases subsided, the Collaboration Councils have re-emerged as places of sharing of experience, learning, and support for the “healers who heal” the City’s most vulnerable, and the healers who need healing themselves.

It has been a remarkable experience to attend recent meetings of Facility Based Collaboration Councils at King’s County Hospital, Brooklyn, Henry J. Carter Rehabilitation Hospital, Bronx, Woodhull Hospital, Brooklyn, Elmhurst Hospital, Jackson Heights, Queens, and Gouverneur Medical Center, Lower East Side.  The Councils from Jacobi Medical Center and North Central Bronx Hospital also provided reports at the first System Wide Meeting of the Collaboration Councils on September 23, 2020, the first one of this year due to the pandemic crisis. (In “normal times” the System Wide meeting is held four times a year)

There was a powerful and emotional theme that all the Councils shared as best expressed by the staff at North Central Bronx:

·      The surge created its own PI Projects

·      We must work as a group to pivot successfully

·      Praise from one discipline/department to another, an essential ingredient in “healing the healer”

·      Joint planning for acquisition and distribution of Personal Protective Equipment

·      Need to establish family rooms; it was such a universal tragedy that families could not be with their loved ones during the first surge!

Innovation in labor management relations is in large measure founded on the empowerment and enablement of frontline workers and their managers/supervisors.  The innovation is for the purpose of solving real problems.  In the case of Doctors Council members, their demands that resulted in the establishment of the Collaboration Councils was simply a demand to be included in quality improvement for their patients.

The pandemic brought problem-solving into a new light as it has done with so many other problems we face in health care and more broadly in our society.

How wonderful it is that Dr. Venugopal, a healer and a leader and a Union member, has been honored as one of so many who lead real problem solving on behalf of the City of New York’s most vulnerable!