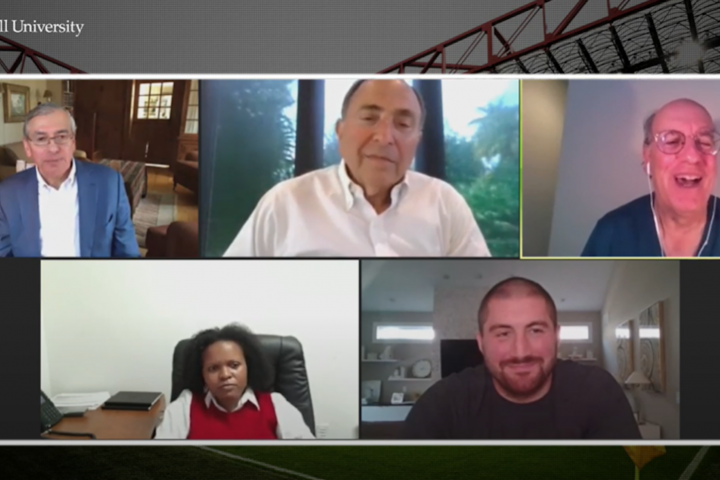 Recently, Harry Katz, the Jack Sheinkman Professor of Collective Bargaining at Cornell’s ILR School and Director of the Scheinman Institute, moderated a virtual discussion on the future of professional sports in light of the COVID-19 pandemic. The speakers for this event are Cornell graduates and leading figures in the sports industry. All the participants used their expertise from their respective experiences to foster a passionate and informed conversation.

Gary Bettman (BS ‘74), the Commissioner of the National Hockey League, began the discussion by reflecting on what has happened to the world of sports because of the pandemic. In addition to the health issues and the economic hardship COVID-19 has brought, Bettman brought up the fact that, by and large, sports fans have not been able to attend games to anywhere near the extent that they were able to pre-COVID-19. “People miss going to games,” Bettman said. “Games and all sports are a great place for people and communities from very different backgrounds and economic strata to come together and be entertained and escape for a few hours.” As an unfortunate consequence of COVID-19, he noted, the energy from large in-person crowds has been missing from sports. Bettman made it clear that by next season the NHL “should be good to go” and back to normal, based on the improved COVID-19 numbers.

JC Tretter (BS ’13), Center for the Cleveland Browns and President of the NFL Players Association, added the player-side perspective. Some changes brought to sports because of COVID-19, out of necessity, Tretter said, may be worth considering maintaining long term. “When you have injuries being down, points being up, drama being up, parity being up, those are really good things for everybody involved—players, fans, and teams. So we need to look on how we can build on that and not just resort back to what we’ve done before.” Another point Tretter raised were the lessons COVID-19 has brought to players as members of a union. The pandemic has helped show players “the importance of solidarity and using your voice to make important demands about health and safety.” Tretter said he hopes players remember these lessons.

Building on Tretter’s theme of recognizing some positives from the changes made because of COVID-19, Jacqueline Davidson (JD ’05), the Director of Football Research for the Tampa Bay Buccaneers, remarked that “We’ve seen what it’s like when you cut things way, way down. “Are we still able to produce the same results?” she wondered. “Do we need as many scouts travelling on the road.” She continued by asking if it was worth spending millions of dollars as a league to send people to the NFL Combine, an event that teams have traditionally used to scout college football players. Davidson also thought that it would be interesting going forward to see what other changes made during the pandemic would be worth keeping around.

Jeffrey Mishkin (JD ’72), a sports attorney, explained some of the ramifications that COVID-19 has had on college sports. “At least 171 sports programs at four year colleges were eliminated, and I don’t think that trend is going to be reversed any time soon.” Mishkin said that as colleges cut certain sports, the reductions are very likely to have a large impact on the Olympics. Still, Mishkin said that the resiliency of sports is remarkable. “Sports have been through other pandemics, world wars, all kinds of upheaval. Sports is, universally, a common language, it’s practically a common religion around the world. Full arenas and stadiums are what all of us crave. I think we’ll be seeing all of that again, really, without doubt.”

View a recording of the entire discussion.