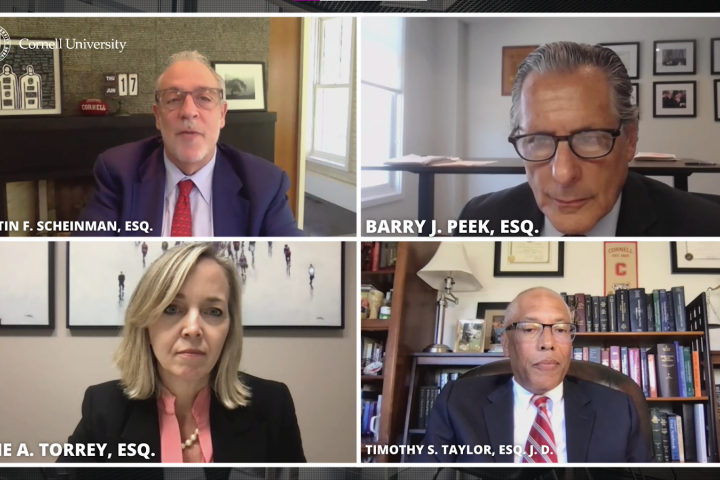 Recently, the Scheinman Institute Employment and Labor ADR Hub reached its one-year anniversary. To mark the occasion, the Hub hosted a webinar on using a collaborative team approach to dispute resolution. In accordance with the motto “Several Heads Are Better Than One,” four alternative dispute resolution experts who are part of Scheinman Arbitration and Mediation Services (SAMS) discussed their approach and experiences.

Leading the panel discussion was Martin Scheinman, the founder of SAMS and the Scheinman Institute on Conflict Resolution. Scheinman explained the need for a collaborative team approach to dispute resolution. He noted how they work together in recognition of the fact of the enormous complexity of certain labor-management negotiations. This includes the interplay of government organizations like the EEOC (Equal Employment Opportunity Commission), the DOL (Department of Labor), the Department of Health, the New York City Department of Consumer Affairs and Worker Protection, as well as the demands of multi-party arbitrations and mediations in the areas of sexual harassment, gender, race, orientation and age discrimination.

Barry J. Peek, a fact finder, arbitrator and mediator, joined Scheinman in describing the advantages of the collaborative team approach. “My first exposure to the benefit of utilizing multiple neutrals was when I was still a practicing attorney representing the United Federation of Teachers (UFT) in New York.” Peek described a memorable experience in a labor dispute involving multiple parties. The parties included outside law firms, in-house counsel for the UFT, representatives of a paraprofessional unit which had a separate contract, and various economic consultants. Representing New York City in the same dispute were the Department of Education, the Office of Labor Relations, and the Office of Management and Budget.

Peek explained how the intricate issues of the dispute, ranging from having teachers involved in hiring decisions to setting the curriculum, made resolving the dispute a difficult challenge. “As you could imagine, dealing with these issues was no easy task. It became clear: one mediator could not help the parties resolve the issue in a timely manner.”

Mediator Julie A. Torrey joined the discussion and provided clarification about when the collaborative team approach is appropriate. “For a simple disciplinary case, this approach would not be necessary,” she explained. Instead, the collaborative approach is suited for “cases where the parties themselves wouldn’t even contemplate trying the case with a single attorney. There may be only two to three cases a year that warrant this approach, but these are cases beyond the capacity of one single person.” Torrey went on to describe a multi-issue, multi-party discrimination case which she collaborated to resolve. “The claimant had alleged that the firm paid its female employees less than comparable males for similar work and had subjected women to disparate terms and conditions of employment. It was very complicated legally.” She explained that the claims against both the firm and individual employees and senior managers fell under various federal, state, and city laws. In this circumstance, the team approach made it feasible to navigate the tangled issues at hand.

The fourth panelist for the webinar was Timothy S. Taylor who is an arbitrator and mediator as well as the Chair of the New York State Bar Association Labor and Employment Section. Taylor revealed what is demanded of arbitrators and mediators and how working in a team can help meet those demands. “You have to be a progressive thinker, you have to think outside the box, you have to be observant.” By working in a team, he explained, it becomes easier to develop these skills and help the parties reach a fair agreement. Taylor went on to explain how SAMS communicates the team approach to parties involved in a dispute. “We’re transparent. We don’t hide the fact that we’re working together. Everything is out in the open, and I believe that we give the very best in service.”