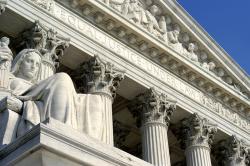 Colvin’s research, published Sept. 27 by the Economic Policy Institute, shows that 56 percent of non-union employees are covered by mandatory arbitration and that 41 percent of the procedures include class action waivers.

In a trend driven by Supreme Court decisions dating to 1991, American employers are increasingly requiring workers to sign mandatory arbitration agreements that bar workers whose rights are violated from pursing their claims in court.

More than 60 million American workers must submit to arbitration procedures implemented by their employers, according to research by Colvin, ILR’s associate dean for academic affairs, diversity, and faculty development, and the school’s Martin F. Scheinman Professor of Conflict Resolution.

Justice Stephen G. Breyer said that a ruling favoring the employers in the case could cut out “the entire heart of the New Deal” and unravel the construct of labor relations that began under President Franklin D. Roosevelt’s administration, according to The New York Times.

Mandatory arbitration is a controversial practice in which a business requires employees or consumers to agree to arbitrate legal disputes with the business through a procedure established by the company rather than going to court, Colvin explains in his research.

Although seemingly voluntary in that the employee or consumer can choose whether or not to sign the arbitration agreement, signing the agreement is required if the individual wants to get the job or to obtain the cellphone, credit card or other consumer product.

To obtain the data, Colvin surveyed 627 non-union private-sector employers between March and July of 2017 and found that more than 56 percent of workers are now subject to mandatory arbitration.

“This trend has weakened the position of workers whose rights are violated, barring access to the courts for all types of legal claims, including those based on Title VII of the Civil Rights Act, the Americans with Disabilities Act, the Family and Medical Leave Act, and the Fair Labor Standards Act,” he writes in “The growing use of mandatory arbitration.”

Class action waivers, which many mandatory arbitration procedures include, bar employees from participating in class action lawsuits to address widespread violations of workers’ rights in a workplace, Colvin explains in his paper.

The court on Monday consolidated three cases to argue whether class action waivers in arbitration agreements are a violation of the National Labor Relations Act.

Justices were divided on their opinions Monday. But, their decision “could have wide-reaching implications for workers’ rights going forward,” Colvin said.

Key findings from the study include: