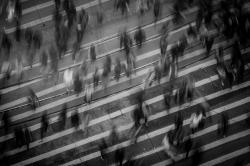 With funding support from the New York City Commission on Gender Equity and the ILR Theme Project 2019, ICS began examining the effect of New York City’s Salary History Question Ban. Over the past year, we designed and fielded two pilot surveys of workers and employers. The full surveys will provide evidence of possible moderating forces on the effect of the ban on the gender pay gap.

While the gender pay gap has substantially narrowed since the middle of the twentieth century, women continue to be paid less than their male peers. The female-to-male earnings ratio of full-time workers rose from 60 percent in the early 1980s to nearly 80 percent in 2014. Even after accounting for a rich set of determinants of pay including education, experience, region, and occupation, there remains a gap of 8.4 percent. Understanding how much of this gap is due to discrimination is critical to further narrowing of the pay gap. Decomposition of the gap reveals a persistent unexplained shortfall for women, which is suggestive of labor-market discrimination. Multiple field experiments have attempted to isolate the role of discrimination; finding evidence of discrimination on the basis of sex.

One hypothesized channel to reduce pay inequality caused by discrimination is to prohibit employers from asking about a candidate’s prior salary. Some evidence suggests 83 percent of workers were asked about their prior salary during the interview process. The central argument of these salary history pay bans (SHPB) is that basing one’s new salary on one’s old salary perpetuates prior gaps. Thus, the bans aim to weaken the path dependence of compensation and focus pay on the qualifications of the candidate. Effective October 31, 2017, New York City was the first municipality in the country to enforce an SHPB.